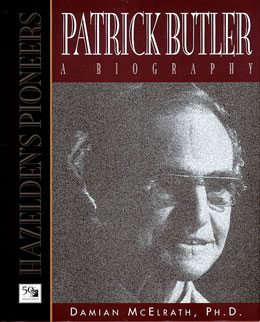 Pat Butler's own story, recounted in this book, is one of early wealth and accomplishment accompanied by worsening bouts of solitary drinking that brought him to Hazelden at a time when both he and the struggling institution were in their most desperate need of help.

Damian McElrath writes of Pat's life: from his birth in 1900 into a first generation Irish family of mining entrepreneurs, through his college years at Yale, to his work for the family business in Cleveland. There, between 1924 and 1939, he married, raised a family, served in the Ohio legislature, marketed iron ore, and became afflicted with an illness that grew progressively worse as the years wore on. It was not until 1950, as a retired millionaire in St. Paul, that Pat tried the simple treatment model at Hazelden, where he began a life of sobriety and discovered his new avocation: helping other alcoholics.

McElrath explores the crisis and conversion that finally led to this radical change. He touches on the history of Hazelden as it intersects with Pat Butler's journey, beginning with the Butler family's financial rescue of Hazelden in 1951 and continuing through Pat's long-term service as president and time as chairman of the board. This is the inspiring story of a man whose dedication, loyalty, and compassion gave Hazelden a sense of direction and a spirit of humanity and service that to this day inform the gracefully nurtured concept of a caring community. Accompanying this tale are nearly thirty photos as well as the personal testimonials of people who knew Patrick Butler, and whose words round out McElrath's inspiring picture of this remarkable character.

The inspiring story of Patrick Butler whose dedication, loyalty, and compassion gave Hazelden a sense of direction and a spirit of humanity and service still evident to this day.