"Sometimes we evade suffering because it throws us off balance and leaves us feeling just a little too exposed for our liking." 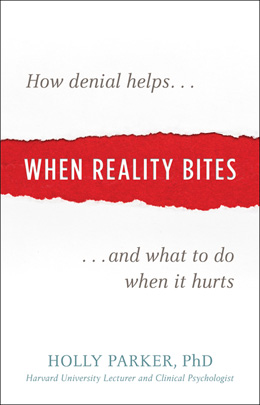 Tune In Today: Turning Down Denial and Turning Up Compassion


Denial is often seen as an inability or unwillingness to face unpleasant or difficult realities—from financial losses, to illnesses like alcoholism, to larger social issues like climate change. In some instances, denial can be detrimental because it can keep you stuck in a cycle of destructive behaviors. However, denial can also be very useful for helping you get through hard times, allowing you to tap into your resiliency for emotional survival.

In her book, When Reality Bites: How Denial Helps and What to do When it Hurts, lecturer and author Holly Parker shows us how denial can help us survive crises and tragedies as well as how to recognize when our use of denial becomes counterproductive or detrimental—for ourselves as well as our neighbors and the planet. In this excerpt, Dr. Parker describes the ways we often "tune out" uncomfortable realities and offers a method for turning up the volume on compassion. With practical and relatable solutions to uncovering, reframing, and harnessing this very normal coping technique, Parker takes the shame out of denial and allows us to see this normal human impulse clearly.

Tuning Out
We're capable of great love, caring, and giving, but we're also adept at turning down the dial on pervasive challenges, including others' suffering. So if you identify with Giles in the following example, please cut yourself some slack— and join the rest of society.

After a long slog at work, Giles can't wait for a tranquil evening with the TV. Ah! There it is! he eagerly thinks as he finds a movie he wants to see. Then a commercial break interrupts his tranquility. "Every day, countless people die of starvation," a voice laments as haunting images of emaciated faces and bodies pan across his television screen. "Oh no," Giles groans, getting up to grab something to drink and avoid what he is seeing. "Not right now."

We all find ourselves distanced from others' hurt at times. And this isn't necessarily unhealthy either. Just imagine if we could feel the totality of the suffering in the world. We'd either lose our minds or we'd sob all day, too despondent and hopeless to get out of bed. We need the ability to turn the dial both ways: up and down. Here, though, we're going to focus our attention on when we turn down the dial a little too far.

Giving Human Suffering the Slip
The study of how we turn away from others' suffering is gripping. Dr. Stanley Cohen, a sociologist, outlined three categories of this form of denial. The first type is when we say that a problem simply isn't there. Those who turn down suffering of the past are an illustration of this, such as individuals who actually claim that the Holocaust never took place. Another example is people who believe that HIV doesn't hurt anyone and doesn't cause AIDS. The second form of denial is to change how we frame the problem. An especially striking recent instance of this was the textbook company in Texas that described enslaved Africans in America as "workers," rather than as slaves. finally, the third type of denial is to reject the consequences of the problem. For example, Giles may readily acknowledge the awfulness of human starvation but deny that he should pledge money to remedy the problem, saying, "What's the point? A little money isn't going to fix that!"

Sometimes we evade suffering because it throws us off balance and leaves us feeling just a little too exposed for our liking. Remember our acute need to feel like we're in charge of our own fate, and how unsettling it is to realize that misfortune can strike at any moment? When we see other people battle hardships that happen to them through no fault of their own, it pulls us nearer to the plain truth that this could be our fate too. To guard ourselves against this disquieting reality, we step away from others' suffering. Unfortunately, as a 2015 study revealed, when we're in this disconnected mindset, we're more apt to blame others for their hardship and are less inclined to help.

Shaking Off the Environment
Although more people are thinking about the environment now than they were back in 1965, by and large, we still have a tendency to turn down the dial on our alarm about the future of our planet. And why do we do that, especially when the Earth is the only home we have? Well, research suggests that this partly links back to our need to believe that we can control our fate and that we live in a fair world that won't harm us, at least as long as we're decent people. We seem to keep returning to that theme and with good reason. It reflects a forceful need within us. In point of fact, the more we believe in a controlled, fair universe, the more likely we are to be skeptical of environmental hazards. Even when researchers merely evoke ideas of a fair universe within us, we're less inclined to help the environment. But let's go back. Why would the idea of an even-handed world hamper our ability to face environmental concerns in the first place? One possibility is that the potentially disastrous results of human-made environmental problems like climate change go against our image of an orderly, controlled world. So, to keep hold of this belief and cushion ourselves against the angst of losing it, we turn down the dial on our concerns about the environment instead. Another potential reason why we turn down the environmental dial is that we're trying to evade the policy ramifications that could come from admitting there's an issue. If we don't want to pursue the solutions, we probably won't want to pursue the problem.

Turning Up the Dial on Compassion
The world is a wondrous place, but let's face it, it's also rife with torment and overwhelming challenges. It would be too much to go through our daily lives totally attuned to it all 24/7, so it can be quite protective and adaptive for us to turn down the dial on it at times. All the same, we don't want to be so insulated that we lose touch with adversity or disregard places where we can make a difference. One way we can be more mindful and compassionate is to try meditation. In a 2015 study, researchers trained people in a set of meditation techniques called "the four immeasurables":


After people practiced these techniques for three months, they showed greater signs of compassion along with fewer indicators that they were turning down the dial on others' pain. Presumably, you can apply these techniques toward humans or nonhuman animals, and although they stem from Buddhism, you certainly don't have to be Buddhist to practice them.

About the Author:
Dr. Holly Parker, or Dr. Holly, as she's more playfully known, is a psychologist with a passion for empowering individuals to cultivate the sort of life that reflects what they sincerely wish for, one that is authentic, gratifying, and joyful for them.

She obtained her PhD in experimental psychopathology from Harvard University, where she conducted research and was a Karen Stone Fellow and Sackler Scholar. filled with an inner fire to help uplift people's lives through human connection, Dr. Parker re- specialized in clinical psychology at the University of Massachusetts, Amherst.

Presently, she zestfully engages in clinical work, teaching, public education, and writing. She is a lecturer at Harvard University, where she teaches the popular course "The Psychology of Close Relationships." She is also a practicing psychologist and an associate director of training at the Edith Nourse Rogers Memorial Veterans Hospital. In her clinical practice, people have given Dr. Parker the honor of joining them as they draw nearer to those formidable yet ultimately freeing spaces in life that they would, understandably, much rather bypass.

Dr. Parker is also the author of If We're Together, Why Do I Feel So Alone? (Berkley Books, 2017), which walks alongside readers hoping to mend emotional unavailability in their romantic relationships.

© 2016 by Holly Parker
All rights reserved