"The Twelve Steps also help us deal with fear, self-pity, and resentment." 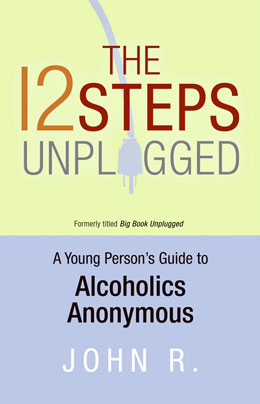 A Skeptic's Guide to
the 12 Steps

Mindfulness and the 12 Steps

A Story for You: Bill W. and the Beginning of AA


In his book The 12 Steps Unplugged: A Young Person's Guide to Alcoholics Anonymous, adolescent addiction counselor John R. helps us discover the hidden treasures of the Big Book. He interprets the philosophies and stories of the Big Book in straightforward language that speaks to regular people.

The information in this excerpt is essential for those of us who are coming to terms with our addiction and beginning early recovery. The author compares his experiences to that of Bill W., the co-founder of Alcoholics Anonymous—how they both struggled with accepting addiction. We can use this excerpt to begin connecting with the basic messages of getting honest with ourself, accepting the help of others, and finding a relevant spiritual support.


The Big Book begins like an old movie. We meet Bill W., a high-flying, gin-loving Wall Street guy making millions during the Roaring Twenties. But, you wonder, what does this have to do with me?

Bill is a promising guy with a bright future. He crashes and burns because of his insatiable appetite for alcohol. I was one of those guys, too, only many years later. I was a pot-smoking kid from the suburbs. I washed dishes for spending money.

I first got drunk at fourteen. In the kitchen of a friend's house, I guzzled bourbon stolen from his parents' liquor cabinet.

Like Bill, I'd heard strong warnings about alcohol, especially from my parents. They'd told me about my grandfather, a promising salesman who ended up a skid-row drunk. That first night I drank, giddy with the alcohol in me, I walked a straight line along the pattern in the kitchen carpet. "See—alcohol won't affect me the way it does others." So began an early delusion about being invincible.

Bill defended alcohol. When his wife voiced her concerns, he rationalized that men of genius had come up with their best stuff when drunk; that the philosophers thought their deepest thoughts under the influence. I remember saying the same sort of thing while smoking pot in another friend's basement.

Any of this sounding familiar?

Find the Common Ground
Here's the first secret to making some sense of the Big Book: Look for what you have in common. Then you'll be able to hear what it has to say.

When Bill's friends confronted his drinking, he argued with them. When my parents confronted me with bottles or bags they found, I lied and denied. We got the same result—we hurt those who cared about us. We put our drugs before our loved ones.

Bill's consequences mounted. He could no longer choose when he wanted to drink; he needed alcohol to function.

I felt the same way. I couldn't go to a party without using. I could barely walk down the school hallway without being high. I needed to drink or smoke dope to calm my emotional shakes.

Yet, and here's the crazy part, Bill and I both believed we could still control our use. That, my friend, is called denial.

Suddenly, Bill woke up. He knew he had to quit, so he did. Then, someone offered him a drink. He took it but couldn't stop. He came home drunk. He proved he didn't have control—once he started drinking, he couldn't stop himself.

That was me. Light a joint, I had to finish it. A toke or two wouldn't do. What was the point of that? I wanted to get high.

Bill repeated a cycle of resolve, drink, remorse, drink. Me too. I remember puking my guts out the morning after a night of drinking, hugging the toilet and swearing I'd never drink like that again. Then I'd wind up drunk that night! Of course, the next day I'd feel shitty about myself. Then I'd have to get high or drunk. My life cycled down the toilet.

Nowhere to Run
Bill tried geographics, moving from the city to the country and from the country to the city. He brought his problem with him wherever he went. I switched from school to school. But, what do you know? I kept partying. My problem dogged me.

Bill details financial disasters, something I didn't experience as a teenager living with my parents. But Bill had moral, mental, and physical consequences I could relate to.

He stole from his wife's purse. I stole dope from my friend. I knew it was wrong to steal, but I sacrificed my values to get a fix. Whenever I violated my moral code, I felt like scum. That's how alcohol and drug abuse quietly corrodes your self-esteem.

All I wanted to do was get wasted, blasted, loaded, stoned, bombed, shit-faced. Ever think about those terms and what they're saying? When I got wasted, I ended up wasting my life. Bill believed self-knowledge would allow him to drink without the consequences. Ha! That's like saying, "Knowing I've got diarrhea is enough for me to make it stop." Good luck.

Bill became imprisoned by his drug of choice. He couldn't control alcohol; it controlled him. And it wasn't a kind warden. Nor was my drug of choice—marijuana. It doled out some nasty punishments, including four days in detox after my last night of using.

The God Stuff
For Bill, an old drinking buddy showed up sober. He asked Bill if he could share with him how he had done it. The guy had gotten religion and followed some basic steps.

Before you freak out about the God stuff, listen to what happened to him. Bill had some reservations and suspicions himself. But his friend suggested, "Why don't you choose your own conception of God?" He wasn't trying to cram a belief down Bill's throat. Instead, he suggested that Bill try to find God in his own experience and out of his own understanding.

That idea helped me when I met the Twelve Steps in treatment, which followed detox. I was angry at a God who had not delivered on my prayers. I had rejected the God my parents had raised me with. But when I found out I could choose my own belief, it put the responsibility back on me and took away the need to rebel. I started my spiritual exploration.

Bill's friend told him that "God had done for him what he could not do for himself." Like Bill, he had tried to quit on his own and failed. But with God's grace he had gotten sober, cleaned up his life, and found peace. Whoa! Bill saw a miracle sitting before him. He wanted what this guy had.

All he had to do was be willing to believe in a power greater than himself. He became willing to have God with him, and God showed up. He humbly offered himself to God. In other words, he turned himself over to the care and direction of a loving God.

I, too, realized that I had placed my faith in alcohol and drugs. That had not led to my salvation. Detox was no paradise. I was ready to try something else. In treatment, I met people who had been addicted to drugs and alcohol but had broken free. They had a peace and ease that I wanted. I was willing to do what these people—we called them counselors—suggested.

They pointed out where my way had gotten me. "If that's where you want to be," they said, "don't change a thing. But if you want what we've got, try trusting God, however you conceive of him."

Bill's friend promised him that he'd enter into a new relationship with his Creator. My counselors basically promised the same thing. Not only would this plan of action work to keep us clean and sober, it would be rewarding.

There was, of course, a hitch. Here's what we had to do:


Our reward for these efforts? A second chance to a happy life.

It wasn't, however, happily ever after. Bill felt plagued by self-pity and resentment. I felt haunted by fears and resentment. But there was a way out. Bill struck upon it in the fellowship of Alcoholics Anonymous, which he founded without knowing what he was doing. He merely reached out to other alcoholics. He eventually wrote the Twelve Steps, which can serve as our blueprint for living. The Twelve Steps also help us deal with fear, self-pity, and resentment.

Bill also tells us that getting clean and sober can be fun. Life on this side of the drugs doesn't have to be dull. That was good news to me. Years later, I can say, it's true. What will you have to say about it years from now?

About the Author:
John R. sobered up at seventeen, before he was old enough to legally drink. Over twenty years of continuous sobriety, he has worked as an addiction counselor with young people in high schools and residential treatment centers. He also has written extensively on the subject of adolescent addiction and recovery. He lives in Minneapolis with his wife and their two children, but calls his Thursday night AA group home.

© 2003 by John Rosengren
All rights reserved