"One of the biggest gifts our sobriety provides is that we do not continue to hurt people the way we have hurt them in the past." 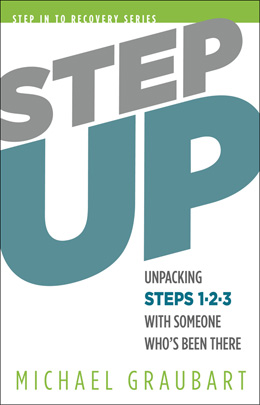 A Gentle Path through the Twelve Steps:
The Classic Guide for All People in the Process of Recovery

Drop the Rock:
The Ripple Effect

Questions and Answers for Recovery Beginners


When we first enter recovery, attending a Twelve Step meeting can seem as if we've landed on a different planet. We don't know the etiquette or the different jargon being tossed at us. After all, we are still new to this whole sobriety idea in the first place. It can all feel a bit overwhelming and that's okay. This is normal for everyone in the beginning. The point of a program is to take it step by step, in whatever way works for you.

In his book Step Up: Unpacking Steps One, Two, and Three with Someone Who's Been There, Michael Graubart tells it to us straight, offering a practical approach to the first three Steps. This excerpt addresses some of the common yet important questions and concerns we may have as newcomers in recovery.

Okay, so now you've taken the first three Steps (or at least you read about them and you found them vaguely interesting). Here are answers to some questions that you might be wondering about.

Q: What Is Cross Talk and Why Can't I Do It?
A: One of the nicest things about Twelve Step meetings is, unlike everywhere else on the planet, people don't interrupt each other. Not only that, you could put your hand up and speak for two or three minutes, and no matter how dumb, trivial, or useless your share might be, everyone will either thank you or give you a round of applause.

How great is that?

Seriously, it's fantastic that there is little to no cross talk in Twelve Step meetings. Cross talk means giving advice to another person, or commenting directly on a prior share in the meeting. Humility dictates that we don't cross talk. After all, if we were so smart, we would never have become alcoholics and addicts in the first place. We don't have all the answers for ourselves, so why do we suddenly think we have all the answers for other people?

On top of that, there's a chilling effect if it's clear that people are going to comment on what members have to say. It feels safe when they know that their message will neither be interrupted nor criticized. In some meetings in New York City, the leader comments on whatever each member just shared, often in an impenetrable if charmingly streetwise outer-borough accent. In those meetings, I sometimes ask the leader not to comment on what I have to say.

The main thing is that we alcoholics and addicts are people who don't feel safe anywhere when we first get sober—with the exception of meetings. So it's up to us to create and maintain an environment for newcomers so that they feel comfortable enough to speak without worrying.

No cross talk is pretty cool.

Q: Do I Have to Tell Friends, Family, and Coworkers That I've Entered a Twelve Step Program?

A: It's said that an extrovert is someone to whom nothing really happens until he tells about it. Or maybe we just live in a world of Oprah-like compulsive over-sharing.

Either way, you don't have to tell anybody that you're in a Twelve Step program.

Remember that the last name of almost every Twelve Step fellowship, with the exception of Al-Anon, is Anonymous. In AA and other Twelve Step programs, we think highly of alcoholics and addicts, because that's what we are, too. We recognize our common struggle, our common humanity, and our common solution.

Out there, people don't like us. Addicts and alcoholics are considered undependable, unreliable, dishonest, two-timing, selfish, and thoughtless. In the meetings, we laugh at the scrapes we get ourselves and other people into. Out there, nobody's laughing.

So you don't have to tell anyone that you've entered a Twelve Step program. It's really not their business. What matters, going forward, is how you behave, how you treat people if they do know that you are in a recovery fellowship. As the expression goes, you may be the only copy of the Big Book they see that day So they may well be judging the sincerity and effectiveness of the program by how you act.

This doesn't mean that you have to suddenly sprout a halo and wings and always do things perfectly. It does mean that if you're going to tell people that you're clean and sober, that you've turned a new leaf, and that you've found a new spiritual path, you'd better act like a decent person. If you're going to be the Messiah, don't make a mess.

Pretty much everyone in my world knows that I'm sober in AA—everyone in my extended family, all of my friends, and even most of my coworkers. I'm open about my anonymity for two reasons: First, when I was new, I started telling people because it meant that they would be less likely to offer me a drink. And second, they can use me as a resource—if they or anyone they know needs Twelve Step recovery, they know they can call me and ask me about it.

As for breaking other people's anonymity, I just don't do it. The damage that can be caused by gossiping about fellow members is endless and sometimes irretrievable. If running my mouth means that I could harm somebody else's relationship, reputation, or career, why would I do it?

Q: Will the People I Hurt Ever Forgive Me?
A: Probably.

Most people are resilient and want to put the past behind them. Whatever damage we did was done; we cannot un-ring the bell. But one of the biggest gifts our sobriety provides is that we do not continue to hurt people the way we have hurt them in the past. This is for two reasons: First, when we are active in the program, we reduce the level of pain we have inside us, pain we dish out on other people. Second, the awareness that our sobriety hinges on making amends for when we harm people acts as a governor on our behavior. At some point, the realization kicks in that if I say or do something harmful, I will have to apologize for it. Rather than have to apologize, I simply don't do the harmful thing in the first place.

This is called maturity.

Sometimes addicts and alcoholics say to themselves, "What's the point? They'll never forgive me."

Warning: This is your disease speaking to you. It's telling you that things never change for the better, so why not drink or use?

Don't listen to that siren song. It's a dirty lie. I have seen so many marriages, family relationships, and love relationships of all kinds restored through active application of the Twelve Steps. Stick around and the same thing will most likely happen to you.

It's not a guarantee—we cannot control what other people say or do. I don't think everyone I hurt forgave me, even when I made my amends. For the most part, though, people really do want to prove William Faulkner wrong when he said, "The past is never dead. It's not even past."

It's a defeatist attitude to believe that relationships cannot improve. You may not get a particular relationship back, whether it's a marriage or anything else, but you just might. And if anything, while you may not always be able to make things better, you certainly will not be making anything worse.

About the Author:
Michael Graubart is the New York Times best-selling author who penned Hazelden Publishing's Sober Dad: The Manual for Perfectly Imperfect Parenting and Step Up: Unpacking Steps One, Two, and Three with Someone Who's Been There. He writes under a pseudonym to maintain his anonymity and speak frankly about his experiences in Twelve Step recovery.

© 2017 by Michael Graubart
All rights reserved