"We're encouraged to accommodate ourselves to these suggested Steps and traditions in whatever ways we find most comfortable and effective." 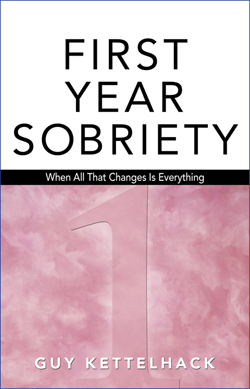 Second-Year Sobriety: Getting Comfortable
Now That Everything Is Different

Third-Year Sobriety:
Finding Out Who You Really Are

Open Invitation: Work the Program that Works for You


When we're new to anything, there is so much to learn. Early in our sobriety, we're learning how to operate without substances, but also how to navigate all the emotional and mental challenges before us without turning to alcohol or drug use. In First-Year Sobriety: When All That Changes Is Everything, Guy Kettelhack offers practical advice about how to approach life, with all its obstacles and challenges, when we're new to sobriety.

In this excerpt, he explains that there isn't one specific way to go through the program, or to do recovery itself. We're not right or wrong—there's only one requirement for membership in any Twelve Step program: the desire to stop drinking or drugging. We need not rigidly follow any other aspects of Alcoholics Anonymous or other Twelve Step programs. Kettlehack reminds us that we always have permission to make our program our own. Some people work the Twelve Steps, and some people know they're there but choose not to follow them one after another. Either way, there are plenty of people who use numerous methods to achieve long-term sobriety and build satisfying, productive lives in recovery. The main thing is navigating a way out of our active addiction, and the Twelve Steps are here to guide us.

Many recovering addicts and alcoholics seem to delight in heresy, or at least in bucking the system. So many of us have balked at orthodoxy for so long that we get very uncomfortable when there's any hint of authority taking over and telling us what to do. Many of us bristle at the least sign of "You must do this" from anyone—whether spouse, lover, friend, boss, family, or even people in AA.

Realizing how great the latitude is in Twelve Step programs can be a shock, however, especially to newcomers who haven't had any experience with anything so laissez-faire or open-ended. So many of us steel ourselves to be told what to do, because that's what our experience of the world has always been: people telling us (often angrily) what to do. Because so many of us got into such horrendous trouble when we were "out there," it's what we've come to expect from nearly any relationship or group situation we get into. And now, all that this group requires of us is a desire to stop drinking or drugging. It can be unnerving, to say the least.

But the permissiveness of Twelve Step programs ends up benefiting so many of us. Making the desire to stop drinking or drugging the only qualification for membership—and even then a qualification you decide for yourself whether you've got—can prove to be the source of some our deepest healing. This same permissiveness is built into every "Step" and "technique" you'll hear about in Twelve Step programs. Everything is offered as suggestion. The program thus becomes an open invitation: We're encouraged to accommodate ourselves to these suggested Steps and traditions in whatever ways we find most comfortable and effective. Not that there's any lack of guidance. In fact, as you've already discovered if you've begun to read the copious literature Twelve Step programs make available, there's barely a square inch of recovery that AA or NA or any of the other Twelve Step programs haven't made a very conscientious attempt to prepare you for. But nobody is requiring us to do any of it. Nobody will throw us out if we do something "wrong." There's nobody, anyway, who could make such a requirement: No one person or small decision-making group rules Alcoholics Anonymous or any other Twelve Step program. The decisions that do periodically need to be made to keep Twelve Step organizations afloat are always the product of wide consensus. There's no one behind the scenes taking over and running things.

I've taken pains to emphasize the enormous latitude inherent in Twelve Step programs because it's so clear to me that this is a message that urgently needs to be heard. I've seen so many recovering people in their first year get eaten up with anxiety about the possibility that they're not working the Steps quickly or effectively enough. Some people benefit enormously from getting a quick overview of the Steps: "doing" them in fairly rapid succession, generally with some pretty firm guidance from other recovering people who have followed the Step route themselves. Again, there's no one "right" or "wrong" way to do any of this. A very structured approach, with black-and-white do's and don'ts, simply works for some people and doesn't for others.

There are even people who don't formally "do" the Steps at all. One friend of mine somewhat grumpily insists that he's never written down a Fourth Step or an Eighth Step list and doesn't plan to. He's leading a productive, satisfying life and has nearly ten years in sobriety. Is he "exempt" from the Steps? Actually, when you get past his grumpiness and hear a few details about how he lives his life, you find out he's been doing the Steps quite conscientiously. He's become very clear about the consequences of his actions in his past drunken life and his present sober one. He's talked about all this with people he's close to in AA, and he listens receptively to other people's experience, strength, and hope so that he can learn from it. He's gone to great pains to patch up messes he's caused and sometimes still causes now, sober. He feels a genuine humility about his gift of sobriety, and he's become a wonderful power of example of what a "successful" sober life can be all about. He's helped a lot of other people get and stay sober. Heretic that he'd like you to believe he is, he just doesn't want to call what he's doing "Steps." I noted earlier in the book that people who don't have a formal sponsor relationship often have other friendships that perform the same function. Similarly, people who remain sober and have happy, productive lives usually are doing some pretty complete version of the Steps whether they think they are or not, even if they may not want to call what they're doing "Steps."

What, after all, are the Steps really about? Dorothy, who's on the verge of completing her first year of sobriety, has made a particularly conscientious attempt to find out. She hasn't, she says, "actually completed any but the First Step. My sponsor encourages me to take whatever time I need to work the Steps," she explains. "There's just so much to think about and absorb about the Second and Third Steps, especially accepting that I've even got a Higher Power, what 'sanity' means, all of that." But her "slow approach" doesn't, she says, keep her "from making what I sometimes think of as 'raids' into the rest of the Steps. In fact, I go to a lot of Step meetings, read the literature on the Steps, and it's amazing—I feel like I'm already doing at least bits and pieces of all of them!"

Some version of the Twelve Steps seems to get done by just about any recovering person who "doesn't drink and goes to meetings." It seems we end up wanting to recover more the more recovery we get; it's as if we know intuitively that we need to follow the pattern set out by the Twelve Steps in order to deepen and improve our sober lives. One of the clearest observations I've made about people as they "work the Steps" is that the Steps, over time, make more and more visceral sense. You may even feel like saying "I already knew that!" as you progress from Step to Step, or you may feel that you've already done much of what you're being asked to do!

It's a particularly welcome fact that there's no timetable involved. Nobody's clocking you or monitoring your "progress" in any kind of judgmental way. The main motivation for all of us in "working the Steps," however we decide to do it, seems to be an ongoing desire to keep getting better—for ourselves, not to impress anybody else. We do it because we want to participate more fully in life, to live as consciously, freely, and joyfully as we can. It's arguable that the Steps outline an organic process that sobriety, in a sense, wants to create for itself—that the Steps have codified something you're on the road to doing anyway, just as a product of not drinking and drugging, and regularly going to meetings.

Luckily, however, we don't have to reinvent the wheel—or the Steps. Most of us seem to find out sooner or later that it's easier to pay attention to suggestions others have made about their own "dance" of Steps than it is to create entirely new dances for ourselves. However, if you want to create your own dance, you can. As with so much else in recovery, it's all up to you—and your Higher Power.

About the Author:
Guy Kettelhack is the author and coauthor of more than twenty-five nonfiction books. He lives in New York City.

© 1992 by Guy Kettelhack
All rights reserved