"Alcoholics finally have a place where personality and winning is less important than principles and group unity." 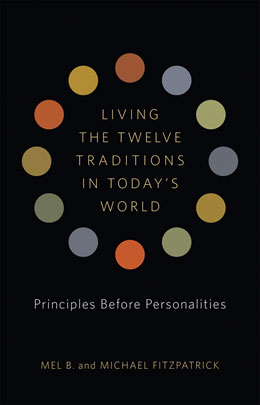 A Woman's Guide to Recovery

Undrunk: A Skeptic's Guide to AA

Unity and Humility: Tradition One and the Success of AA


While there are multiple paths through recovery, Alcoholics Anonymous has been a popular and successful one for decades. Whether we're newly sober or have already gained long-term recovery but are new to the Twelve Steps, it can be helpful to learn the history behind AA.

In their book Living the Twelve Traditions in Today's World: Principles Before Personalities, Mel B. and Michael Fitzpatrick celebrate the history and development of Alcoholics Anonymous and interpret the program for the twenty-first century. The following excerpt includes their discussion of the first Tradition: "Our common welfare should come first; personal recovery depends upon A.A. unity." We learn how its embrace of unity and humility has been used as a tool for guidance and problem-solving within AA groups for nearly eighty years.

By 1945, Alcoholics Anonymous was becoming an exciting success story with a proven track record. Having started with just two men meeting in 1935, it had grown to nearly a thousand groups with an estimated 25,000 members. AA was getting considerable notice in the media and was becoming known as the place to go if one had a drinking problem. With its rapid growth, there were signs that its reach could become worldwide. Though AA had problems, a main focus of its founders was to ensure that AA's very success would not cause it to self-destruct from the shortcomings that had destroyed other promising movements. While AA would have critics and detractors, its survival really depended on its own members and their devotion to its core principles. The core principles would be a protection from strong but misguided personalities who could lead the fellowship astray.

As Nell Wing, Bill Wilson's longtime secretary wrote about in her book Grateful to Have Been There, in the mid-1940s Bill wrote "a set of guidelines for the survival, unity, and effectiveness of the fellowship." He initially called them "Twelve Points to Assure Our Future." Since then, these twelve points have served remarkably well as guidelines for the fellowship. While there have been anonymity breaks and other violations, nothing has occurred to damage AA as a whole or to discourage alcoholics seeking recovery.

The case can also be made that the Twelve Traditions, like the Twelve Steps, convey sound principles for living. If AA members understand and accept the Traditions, they can also receive positive benefits in the way they live their lives. Many AA members have incorporated the principles of these Traditions into their businesses and personal lives and family lives.

The alcoholic has many character defects and personality traits that seem to cause him or her to drink, at least in the early stages of alcoholism. Story after story of sober AA members discloses a similar tale—"Drinking made me feel like I fit in." "When I drank, I felt like I was six feet tall and handsome." "It made my insides feel like what I thought you looked like on the outside." "That emptiness left and I felt okay." The consistency of these messages clearly reflects that alcoholic have had a very difficult time coping with life, an important factor often being the competitive environment in which they were raised.

By the time the alcoholic finds the way to AA, he or she has "hit bottom." Now, hitting bottom means different things to different people, but for the alcoholic it seems fairly universal: "I can't go on living this way. Drinking no longer works, but I can't stop." The book Alcoholics Anonymous describes it using phrases such as "pitiful and incomprehensible demoralization" and "seemingly hopeless state of mind and body." Some alcoholics have been shunned by society and locked away while others have lost their jobs, families, and self-respect. One AA member said, "I've yet to see somebody show up at his first AA meeting on the tail end of a winning streak."

Bill Wilson clearly recognized that the alcoholic had a terrible time living comfortably within society and that most alcoholics could never get or stay sober on their own. Perhaps that's one reason he decided to introduce the Twelve Traditions to the fellowship. Bill's wife, Lois Wilson, said that Bill had studied many societies and governments prior to the writing of the Traditions. One AA member recently stated that Bill W. had created a new government with his Traditions. Of course, AA doesn't consider the Traditions to be a government, but nevertheless, Bill W. was able to create guidelines that have held AA together for more than seventy-five years, and one reason for that may be that alcoholics finally have a place where personality and winning is less important than principles and group unity.

The First Tradition ("Our common welfare should come first; personal recovery depends upon A.A. unity") sets the stage for the next eleven Traditions and each builds upon the necessity of group unity and humility.

Our Common Welfare
A careful look at Tradition One shows that humility, through the deflation of personal power, false pride, and ego, will create the atmosphere required for the individual to recover. Twelve years after the Big Book was published, Bill elaborated on Step One; he indicated that once the alcoholic was able to fully admit that he or she was personally powerless, this declaration would eventually become the foundation upon which a full, sober, and happy life could be built.

The First Tradition creates a similar foundation, which guarantees that both the group and the individual can enjoy the same successful outcome.

The general feeling of unity we have in AA today is remarkable, especially since the membership is made up of people who acknowledge false pride and resentment as major personal problems. Right from the beginning, the AA pioneers envisioned in the Big Book that "every alcoholic who journeys will find a Fellowship of Alcoholics Anonymous at his destination." This has been true for decades, and it's now possible to find a welcoming AA group throughout much of the world. There's also unspoken agreement that the members must get along with one another or alcoholics will die without finding recovery. The First Tradition ensures this by simply stating "Our common welfare should come first; personal recovery depends upon A.A. unity."

This same Tradition evens the playing field, making it certain that all members, regardless of their background and social standing outside of AA, have the exact same membership privileges—no bosses and no human authorities. Although many AA groups and members recognize and celebrate various lengths of continuous sobriety, that demonstration is to acknowledge that the program has successfully worked for those individuals. All members are exactly the same; consequently the newest member is equally as important to the group as the one who has been there the longest.

Each AA member represents one link in the chain of unity that holds the organization together. One member describes it this way: "If we took all the AA members and had them join hands, then had an aerial view, we would see everyone linked together. There would be no way to tell anything more about each individual other than that he or she is another link in the chain."

One might find personal fulfillment and understanding in seeing the AA movement as a ship with many passengers. While the officers and crew are responsible for the ship, every person on board has an interest in keeping the vessel afloat and ensuring that it reaches its destination. When joining AA, each member boarded a vessel that could take him or her safely through the many seas of life, with storms included.

About the Author:
Mel B., a resident of Toledo, Ohio, since 1972, is a writer specializing in recovery, timely business topics, speeches, publicity, and military history. Retired since 1986, he served in public relations for a major corporation headquartered in Toledo.

Michael Fitzpatrick is coauthor with William G. Borchert of 1000 Years of Sobriety and is one of the leading historians and speakers in the field of alcoholism, specializing in the development of the Twelve Step movement.

© 2012 by Hazelden Foundation
All rights reserved