"For many, the process of overcoming addiction requires the willingness to embrace a significant change in attitudes and perceptions." 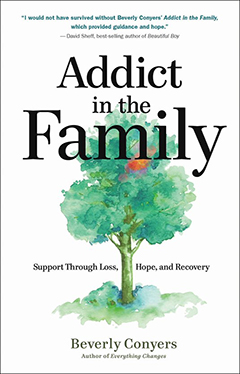 A Gentle Path Through the Twelve Principles:
Living the Values Behind the Steps


To people in recovery, "change" is a familiar word. We often heard it tossed around before we got sober and we certainly hear it now during our recovery journey. In fact, change is one of the most constant things about our lives.

In her book Addict in the Family: Support Through Loss, Hope, and Recovery, Beverly Conyers offers important lessons on love, detachment, and self-care for families who are dealing with addiction and codependency. In the following excerpt, Conyers discusses how recovery differs from simply making a change in your habits and introduces a model for recognizing and tracking six stages in the process of change. While it's written with families in mind, this information is of value for anyone who wants to understand how people change and what progress in recovery—or any significant life transformation—can look like.

A friend of mine has been trying to quit smoking for years. She's tried everything she could think of: patches, gum, hypnosis, support groups, and therapy. She even taped some lurid pictures of smokers' lungs around her house, convinced that the glaring ugliness of the images would deter her from smoking. But her smoke-free lifestyle has never taken hold, and in a matter of weeks or months (once it was almost two years), she finds herself lighting up again. "I've seen the literature. I know the statistics," she'll say. "I'm killing myself, and I feel like a social pariah, hunching in doorways during my breaks at work. What will it take to make me stop?"

What indeed? My friend is facing the challenge of making a personal change, a challenge that addicts and their families know all too well. If changing our habits, attitudes, or desires were simply a matter of identifying a problem and deciding to fix it, then there would be little need for the self-help movement, psychoanalysis, or addiction treatment programs. But the reality is that making any significant personal change is a daunting task. Add to that the psychological and physiological power of psychoactive substances, and the enormity of overcoming addiction becomes apparent.

It is, perhaps, the sheer magnitude of the challenges faced by addicts and their families that has led us to think of addiction treatment in terms of "recovery" rather than simply "change." Change connotes altering certain habits, perhaps replacing one pattern of behavior with another. On the other hand, recovery suggests something deeper and more profound—an inner transformation that broadens an individual's psychological and spiritual sensibilities.

A speaker I heard at an AA meeting alluded to this fundamental difference when he told the audience, "The man I was will always drink." He had become a new person, he suggested, with a new outlook on life and a different understanding of his world. It was this personal revolution that enabled him to remain sober. When those in the addiction community speak of "white-knuckling it" or a "dry drunk," they are referring to individuals who have stopped drinking or taking drugs but who have not achieved the self-awareness and personal growth that comes with recovery in its fullest sense. Certainly it is possible for some individuals to become abstinent without achieving recovery, and abstinence is in itself a monumental victory. But for many, the process of overcoming addiction requires the willingness to embrace a significant change in attitudes and perceptions.

Individuals who are "in recovery" are not just the same people with different habits. They are people who have experienced an inner enlightenment, people whose new choices and behaviors spring naturally from a transformed inner self. It's a lofty concept that has its roots spiritual traditions that speak to the power of human beings to reinvent themselves and begin anew.

"This is all well and good," you may be thinking, "but it's the addict who needs recovery, not the family. After all, it's the addict who has the problem." This is superficially true, but many families eventually join their addicted loved one in a maze of denial, obsession, and unhealthy thoughts and behaviors. And although there are vast differences between an addict's and a family's search for recovery, there are distinct similarities.

For addicts, recovery implies a healing process that includes stopping the use of alcohol or other drugs, replacing harmful habits with healthful habits, building a secure sense of self, and developing a connection with something greater than themselves. Similarly, for families, recovery usually means healing the obsessive-compulsive fixation on the addict, replacing negative behaviors with positive ones, reaffirming their own self-identity, and nurturing a path toward spiritual growth.

The Process of Change
Most of us make large or small changes regularly throughout our lives. We get married or divorced, buy a new house, go back to school, find a different job, change our hair color, cancel a magazine subscription, take up a new hobby, go on a diet, redecorate the living room, and so on. Change is so natural, so inevitable, that we seldom stop to think about the process. However, sociologists and psychologists have given the matter some attention and have constructed a general blueprint of how people change.

The best-known model of change was proposed by James Prochaska, Ph.D., and his co-authors in Changing for Good. Prochaska became interested in how people break self-destructive habits partly because of his own father's struggle with alcoholism. According to Prochaska, regardless of whether people are attempting to make large or small changes, they all go through the same six stages of change.

The second stage is contemplation. This stage is one of growing awareness. Individuals begin to see that there are problems or that certain changes would be beneficial. Sometimes, but not always, a confrontation or a crisis brings about this growing awareness. Those in this stage are beginning to think about their problems, but are not yet ready to do anything about them.

The third stage is preparation. People rarely make immediate changes. Rather, they take their time thinking about the problems and evaluating their options. During the preparation stage of change, individuals start making inquiries, consider possible courses of action, and decide what steps they will take to make a change.

The fourth stage is action. In this stage, individuals are taking steps to alter their behavior. Whether small and tentative or large and bold, the actions taken during this stage are intended to move individuals closer to the successful resolution of their problems. For example, people in this stage may have enrolled in a class, bought a treadmill, entered rehab, or made an appointment with a credit counselor. The key is that they have engaged in some tangible act to address their problems and effect change.

The fifth stage is maintenance. This stage gets to the crux of the matter. Almost anyone can give up chocolate or begin an exercise program or turn off the television—once! It's the permanent establishment of a new pattern, a new habit, a new way of looking at things that's hard to accomplish. In Prochaska's view, progress is seldom linear. That is, people rarely set out on a course of change and proceed directly to their goal. Rather, they experience change as a spiral, where they inch forward, then backward. Move up, then down. The good news is that even as they relapse to earlier stages, they absorb lessons learned along the way. They are not completely unchanged, even though those changes may not be visible to others—or to themselves.

The sixth and final stage is termination. This stage is reached when the problem no longer exists, when the temptation to relapse is no longer present. Some psychologists doubt that this stage is ever fully experienced, noting, for example, that smokers who have been clean for twenty-five years or more may experience an occasional craving, even relapse. Nevertheless, those who have reached this stage have successfully incorporated change into their lives, making new habits, thoughts, or attitudes (often all three) integral parts of who they are.

The value of the stages of change model is that it helps us to recognize that change is a process with a predictable pattern and that setbacks are an almost inevitable part of the process. It is unreasonable to expect that everything can get better all at once or to fear that one mistake or relapse will negate the progress that's been made. Setbacks come with the territory, and some people must move through the spiral of change many times before they are able to achieve and maintain their goals.

About the Author:
Beverly Conyers, MA, is a writer and college English teacher who lives in New England. A respected voice in recovery and wellness, she is also the author of Everything Changes, The Recovering Heart, Find Your Light, and Follow Your Light.