"My main task is simply to face the moment at hand." 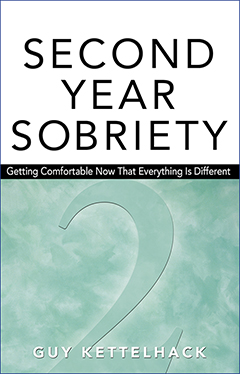 First Year Sobriety:
When All That Changes Is Everything

Third Year Sobriety:
Finding Out Who You Really Are

The Not-So-Good Old Days: Leave the High Drama in the Past


Do you remember the exhausting drama of living with active addiction? Everything seemed to matter so much. Sometimes it felt like things were always a matter of life or death, no matter how big or small they were. Our lives are different now that we're in recovery, but some of us tend to view our drinking and using days with a bit of nostalgia. We are not ready to see the past as it really was—but we should remind ourselves that those were not the glory days we might make them out to be.

In his book Second Year Sobriety: Getting Comfortable Now That Everything Is Different, Guy Kettelhack explores the growth and the challenges we often face in our second year of recovery. In this excerpt, we learn that it is common to miss having a bit of chaos in our lives. If we want our recovery to last, we must continue to be mindful and ground ourselves in the moment.

Life, itself, has enough drama—we should not go looking for more, and we certainly don't need to go creating more. When we can see how dramatic our victories are in recovery, even if they are as small as making our beds in the morning, we can truly start enjoying life as it happens.

Emotional Storms: From Danger to Self-Discovery

While there do seem to be differences between one year or stage of sobriety and another, it's equally evident that you end up having to deal with many of the same issues no matter what year you're looking at. You may now know that "feelings are not facts," but you still can feel awfully hobbled by resentment, fear, and anger. Feelings are still a hot topic in the second year. I often hear people with twenty years of sobriety dealing with many of the same emotional issues we have to face after one year of sobriety. What seem to change, slowly, are the attitudes we bring to those feelings.

Commonly, in the second year, we feel frustrated that despite our yearlong abstinence, our attempts to "work the program," and our boundless good intentions, we're still so often in the fierce grip of powerful, negative emotions. Sometimes our feelings seem to be even more overwhelming than they were in the days when we could blot them out with alcohol or drugs. The immediate danger may not be that we'll pick up a drink or a drug. The first danger is the feeling of separateness and abnormality. Our emotional afflictions, as we may come to think of them, seem to separate us from the rest of the world, to make the prospect of recovery seem?less likely as we become convinced that we're not like anybody else, and thus not susceptible to the same growth and promises of serenity and self-acceptance that other people seem to be able to acquire in sobriety.

By this point, you're also no longer a beginner dealing with the tidal wave of fierce or debilitating emotions you can't avoid in day-to-day sobriety. You've now had a year or more of living through them without picking up a drug or a drink. All of which means you know a little about the subject yourself. But if you're like the majority of second-year recoverers I've listened to, you may suffer periodic bouts of doubt, depression, and exhaustion over the "ongoingness" of feelings, or for that matter, of life.

Susan, a young woman in AA with thirteen months of sobriety, put it like this: "I went through life thinking the whole point was to get to the next payoff, with each payoff being better than the last. Elementary school to junior high to high school to college: a clear ladder upward, as many A's as you could get, as many diplomas, all taking you to the next even more terrific stage. That's how I drank too. Each high had to be better than the last. Each man I met had to be a step up. Everything had to be better, more, higher and higher, till you got to some incredible Prize in the Sky, till you were so famous and rich and satiated that you could—what? Die, I guess.

"But now life seems so different. It just is. My main task is simply to face the moment at hand. I have a different relationship to my dreams. I still have dreams, but now that I'm sober, I find I don't expect them to come true in the wild way I did when I was drunk. Now I sort them out to see what they're telling me, trying to intuit direction from them in a much more thoughtful way. Sometimes that's okay. But other times I want to scream at the slowness of everything! I go into a state of euphoric recall, and I can only remember the great times when I was drunk, the all-night clubs, the wild music, the time this major record executive picked me up and we went to his penthouse in his limo, the times when it seemed the world was there for the taking¿. Then I 'wake up' and remember the horror, the despair, the complete wreckage of the last years of my drinking, what it did to my life, to my spirit. And I return to the present. To what I'm going to make for dinner. To feeding the dog. To picking up my laundry. I feel sometimes like I've been blasted by alcohol—that now, even after more than a year of sobriety, I still have to take things very slowly and carefully and attend to each small detail of my life, not worrying about the big stuff, about the huge grand arc of my future. But it's hard. Those dreams, that crazy wild abandon?of the best part of my drinking life, were terrific. There are times I hate having to give them up."

The Ache for High Drama

Susan illustrates a number of themes that come up a lot for people in their second year of sobriety, and that may have already come up in the first year and may continue into the third and fourth and fifth years of sobriety!

Sometimes our yearning for the "good old days" is not just a result of euphoric recall, the selective tendency of memory to pick out all the good times and conveniently forget the bad. Our attraction to misery can be just as potent. Andrew, who has fourteen months of sobriety, says, "I never felt really alive unless I was miserable. I think it was how I knew I existed. On the verge of getting thrown out of my apartment for nonpayment of rent, my girlfriend dumping me, my boss about to fire me, and me tragically wasted on booze and drugs, the misunderstood loner, the guy who always got the butt end of life—this whole idea that I was a victim of Fate was enormously alluring. It meant I was a kind of noble figure, marked by tragedy over which I had no power." Andrew smiles. "What a crock. But I didn't think it was a crock then. It was how I defined myself. And the great jagged peaks of my misery—God, it was like my life was some kind of mysterious, dramatic novel or movie. I was the tragic star. Someday they'd understand. Someday they'd discover me, like they discovered Van Gogh after his death; they'd discover what a gem of a human being I was. What a misunderstood genius. I got a lot of mileage out of thinking of myself like that."

This hunger for drama, for seeing ourselves as larger than life whether the outsize vision is full of misery or of elation, is common for recovering people, and never more than in the second year of sobriety. The absence of that glamour can leave us feeling baffled and unfulfilled in sobriety. We think, "What is there to aspire?to? Simply not drinking and drugging one day at a time for the rest of my life? That doesn't sound like much of a life."

Andrew says he's realized that sometimes, to compensate for his lost "tragedy," he tends to "sabotage things, almost just to make them interesting. Something starts going well at my job or with a woman I've just met and I'll do something to screw things up. I won't come through at the last minute; I'll miss a deadline or not show up at the time I said I would. It adds drama, somehow, as well as a dose of the old tragic misery I seemed to thrive on in my drinking life. I want my life to have spice, dammit. I'm not sure serenity is such a terrific idea, at least not my notion of it. I want glory and high emotions and impossible dreams. Not simply to face another bowl of oatmeal in the morning."

Andrew identifies a crucial role that strong emotions seem to play for second-year recoverers, as well as people in earlier and later stages of sobriety: feelings acting as distraction. We may turn to the power of feelings the way we used to turn to alcohol or drugs.

Strong emotions are, in recovering people's experience, a lot like strong drugs. They alter us; they give us at least a hint of the entirely changed consciousness we regularly sought and found through alcohol and drugs. It's no wonder that so many of us feel addicted to high drama. What we're experiencing at these moments is often literally a chemical rush. We train our bodies to provide themselves with drugs. Is the implication, then, that we should avoid strong emotion at all costs?

The first truth about feelings is that we couldn't avoid them even if we wanted to. Sobriety does not mean becoming less human. And it is entirely human to feel the full range of emotions, from rage to elation. It seems that our task as recovering people is to become conscious of what our emotions are doing to us.

About the Author:
Guy Kettelhack is an analyst-in-training at the Boston and New York Centers for Modern Psychoanalytic Studies. He has written seven books on recovery. He lives in New York City.

© 1992 by Guy Kettelhack
All rights reserved