"When we are in control of our behavior, we can resist self-destructive impulses and do what's in our best interest, even if we don't feel like it." 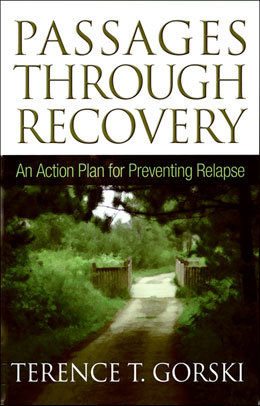 12 Stupid Things That Mess Up Recovery

A Woman's Guide to Recovery


Passages Through Recovery by Terence Gorski provides readers with an action plan to stay on the course of recovery. We're introduced to principles to help prevent relapse, whether we're in early, middle, or late recovery. It can be hard to exercise self-control, especially on holidays, around family and friends. With St. Patrick's Day quickly approaching, this excerpt is a great reminder about how using good judgment can be powerful as we learn to control our behavioral impulses.

Judgment is the ability to predict what's going to happen as a result of what we do. People with good judgment know what's going to happen. They're rarely surprised, and when they are, the surprises seldom cause a crisis. People with bad judgment, on the other hand, are constantly surprised and generally have no idea what caused the problem. As a result, they are in constant crisis.

John, for example, didn't like to pay bills. He found it a nuisance and would put it off until the last minute. One day he came home and found his apartment was cold because his gas had been turned off. When he went to turn on a light so he could look up the number of the gas company, the lights wouldn't come on. He picked up the phone to call directory assistance, and the phone was dead. He couldn't understand why all of his utilities had been turned off. He felt outraged and complained that the utility companies were unfair.

Louise had a bad battery in her car. She knew she needed a new battery but just never got around to buying one. One night the temperature dropped to near zero and her car wouldn't start. She complained about her lousy luck for weeks after that.

No one has perfect judgment. We are all fallible human beings. The point is, we need to be willing to learn. The more we learn, the better our judgment gets.

To learn from our behavior, we must become aware of what we are doing and what happens as a result. We need to take responsibility for the outcomes of our behavior. People with poor judgment refuse to accept responsibility for the consequences they create in their lives. They don't plan. When things happen, they blame it on someone else, instead of thinking about how they could produce different outcomes. No learning occurs. They are victimized by a recurring cycle of crisis.

Mark came into sobriety with a chip on his shoulder. The world was against him, and he knew it. The motto of his recovery was "Nothing I ever do comes out right." He blamed others for the crises in his life. Eventually, he learned that his poor judgment was the cause of many of his problems. He put it this way: "I thought my boss caused all my problems at work. I was convinced he didn't like me because I was a sober drunk. As I began talking about my work problems with my sponsor and counselor, I found out differently. I was making mistakes at work that caused the problems. Even though I was sober, I used bad judgment. I was the one who had to learn how to change. Once I began connecting problems at work to my own bad decisions, I could change. Things are a lot better now."

When we are in control of our behavior, we can resist self-destructive impulses and do what's in our best interest, even if we don't feel like it. Since we're not perfect, we occasionally give in to temptations or fail to act in our own best interest, but this rarely happens in areas that could have a major impact on our lives.

Some people take issue with the notion that we should control our behavior. I have been asked, "Aren't we powerless over everything? Don't we just need to turn everything over to a Higher Power?" I don't believe so. I think we need to divide our actions into those we have control over and those we don't. This is the essence of the Serenity Prayer, which reads: "God grant me the serenity to accept the things I cannot change, the courage to change the things I can, and the wisdom to know the difference." If we were truly powerless over everything, the Serenity Prayer would read: "God grant me the serenity to blindly accept everything that happens to me."

The slogans—Easy Does It But Do It; Turn It Over But Do the Legwork; and Pray for Potatoes, But Be Willing to Pick up a Hoe—more fully reflect, in my opinion, the essence of the Twelve Step approach to behavioral control. If there is something in our lives that we are legitimately unable to control, it is best to turn it over to our Higher Power and trust that it will be taken care of. We are not the keeper of the universe. It is not our responsibility to make sure that everything goes well in the world. But we are obligated to determine what things we have the power to change and must be willing to take responsibility for doing them.

If we developed a strong foundation of psychological health as a child, it will be easier for us to rebuild our psychological strengths in recovery. If we were raised in a dysfunctional family, we will probably have difficulty in recovery, because the problems we developed before our addiction will tend to return, now that we are sober.

Remember this: Chemical addiction causes brain dysfunction, and brain dysfunction disorganizes the personality. Many of us believe that as soon as we are sober, we should be instantly psychologically healthy. The long-term brain dysfunction (post-acute withdrawal) can prevent us from being fully functional for periods of six to eighteen months into recovery. As the symptoms of brain dysfunction begin to clear up, our pre-addictive personality traits return. We return to the same level of psychological health we had before we became addicted. This is why the Twelve Step program places so much emphasis on identifying and correcting our character defects. Character defects can be described as ongoing psychological problems. Some of these problems were caused by our addiction itself. Some were present before we ever became addicted.

Our personality problems or character defects can lower the quality of recovery and lead to relapse. To correct our character defects, we must understand what our personality is and how it operates. On one level, our personality reveals itself in a collection of habits, the sum total of our thinking, feeling, acting, and relating to others. Our personality also reveals itself in automatic thoughts, feelings, and behaviors. We have millions of responses we don't have to think about; they just happen. Some of these are good for us; others are not. If your personality is defined in part by self-defeating or self-destructive habits, these can be identified and worked on in Steps Four through Seven of the Twelve Step program. With these Steps we identify the habits, take responsibility for the resulting behavior, and seek help through our Higher Power and other people in changing that behavior.

About the Author:
TERENCE T. GORSKI, M.A., C.A.C., is a nationally recognized lecturer, an acknowledged leader in the chemical dependency and codependency fields, and a workshop facilitator specializing in relapse prevention, intimacy in recovery, and treating chemically dependent adult children of alcoholics. From his more than twenty-five years of clinical experience and research, Gorski has developed a comprehensive approach to recovery that is revolutionizing the field of relapse prevention. He is the author of Getting Love Right, Managing Cocaine Craving, and Staying Sober (with Merlene Miller), all available from Hazelden.