"I was beginning to see that I had a real problem with intimacy, and I came to understand that I was responsible for any change in this area." 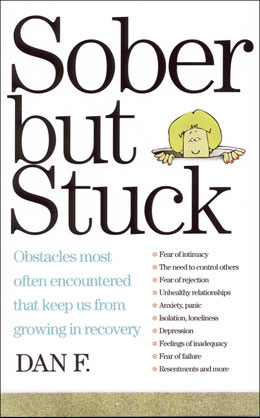 When Misery is Company


In Sober But Stuck, Dan F. reminds us that while in recovery, our addiction is only half the battle. There can be a series of roadblocks that could cause a relapse if not resolved properly. In this excerpt, we are introduced to a man in recovery who has discovered his fear of intimacy. From his story, we're taught how the lack of intimacy can hinder personal relationships and how dealing with our character defects can aid in our recovery progress.

As near as I can determine, my problems with intimacy and closeness began when I was a young boy. I was brought up in an alcoholic household—my mother was the alcoholic. So, early in my life, I saw plenty of marital strife, rage, and despair. What I didn't see was any respect or closeness, any show of affection or loving concern. There was little tolerance in my family, no willingness to grant another person the right to a different point of view. The loudest voice ruled the household—and that voice almost always belonged to my father.

My mother's way of dealing with the stress of the marriage was to get thoroughly drunk and sometimes leave us. We kids had to survive as best we could, and when she returned we all punished her by giving her the "silent treatment." So, by the time I was ten years old, I had learned some pretty powerful lessons. These included:

When I started dating in my late teens, I was thoroughly schooled in the above ways of functioning in a relationship. For more than ten years, I had taken "classes" in how not to be intimate and close. I also became sensitive to rejection. I perfected my ability to manipulate others and developed the skills necessary to dominate and control any friendship or budding relationship.

By the time I reached my early twenties, I had unknowingly developed a broad range of unhealthy defense mechanisms to protect myself from being rejected or emotionally hurt. The concept of being open or vulnerable was beyond me, since I had never learned how to communicate how I felt. There were two parts to my communication problem:

Being solidly stuck in my early lessons—and probably with the need to keep reproducing the early pain—I generally walked away from a budding relationship or one that had begun to require closeness, a give-and-take approach, some acceptance, or compromise. This was all too threatening for me.

Typically I would finely hone my critical faculties and create and justify any number of reasons why the relationship was doomed and must be terminated. Naturally, the fault was always my partner's. Over the years, I clearly signaled to people that I was emotionally unavailable, while at the same time professing to want a meaningful and loving relationship. I certainly gave mixed signals. The truth was, I didn't have the slightest clue of how to be intimate or vulnerable.

While I worked on many issues my first five years of sobriety, developing a sane and healthy way of being in a romantic relationship was not one I was willing to tackle. I was beginning to see that I had a real problem with intimacy and I came to understand that I was responsible for any change in this area. I could call on my Higher Power and I could readily enlist the support of my sponsor and close AA friends, but I was going to have to do the footwork, a step at a time.

Initially what I did was to take half measures. I talked a lot about "vulnerability" and "acceptance," but there was very little of either in me. I was so intimidated, I couldn't seem to understand how my control issues and fear of rejection were consistently undermining any personal progress. Some of the other ways that I resisted changing my behavior were these:

What amazes me is that I was finally able to change these deep-rooted behavior patterns, but no way could I bring about a magical transformation overnight. I had to bite off little pieces, one at a time. First, I had to take a clear stand and accept the fact that if I wanted a wholesome and healthy partnership then I had to be 100 percent willing to change my attitudes and my behavior.

My first step was to talk to my sponsor—in depth. I had to tell him the truth about myself in relationships. I did this over a two-hour coffee session. In his usual taciturn way, he suggested first that I begin a joint partnership with my Higher Power; I would talk or consult with my "partner" (Higher Power) every day. Second, he strongly suggested that I drop all criticisms and judgments about my girlfriend. I needed to suspend judgment and stop building an airtight case against her. Third, I was told to take a big risk and start sharing what I was feeling when I was feeling it. I was told not to filter, edit, or hedge my words, but tell my feelings honestly. Fortunately, by this time I had learned a bit about my feelings and was pretty well able to identify my major moods.

I was then directed to start sharing my problem with my closest Program friends. I had been "hiding" behind a relationship. Now I was being asked to risk my image, my carefully constructed persona, in order to become whole with much resistance, I began telling my closest buddies what was happening to me. They nodded knowingly—they had long been aware of the dimensions of my problem.

Ever so slowly, I learned about compromise and tolerance for another's point of view. I was getting in touch with a full range of feelings. I was sharing my innermost fears of rejection and abandonment. Fear had kept me from any chance of a healthy relationship. But now I was making true progress. And the results? Well, my partner and I have been together for six years. We are committed to a life of sharing and growing.

About the Author:
Dan F. is a contributor for the following Hazelden Title: Sober but Stuck