"Spend them with your child. They'll never be this young again." 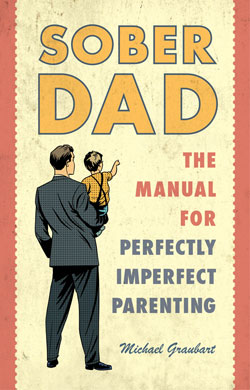 A Sober Moms Guide to Recovery

You Can't Always Be Disney Dad, Particularly When Distancing

Schools have sent kids home, parents are supporting their children around the clock while trying to also put in a productive workday from home. We're all managing our thoughts, feelings, and behaviors in a time of stress--and adding in those of our children makes life all the more difficult. But face it we will! We will be imperfect and make amends when we need to, but we will be there for each other. Whether you've got kids at home or not, here is an excerpt from Sober Dad: The Manual for Perfectly Imperfect Parenting by Michael Graubart that gives us a little perspective into how we might best manage it all: Make a little list of things that have delighted you today. Delight someone else in a list that you've made about them. Share and be with each other, even when we can't gather together in person. And take care.

I've mentioned that I lived in Los Angeles for many years and got sober there. Because of my non-anonymous writing career, I did a fair amount of work with people in Hollywood. Individually, they may be quite nice. Collectively, however, these are the last people on earth you want raising your kids. And yet, the standards they set, the cultural race to the bottom that they inflict on our families, goes on unabated. It's just unfortunate.

Michael Medved wrote a book called Hollywood vs. America, in which he made the same point--it's almost as though our culture is purposefully seeking to destroy the moral fiber of our kids (and our adults). In that excellent book, Medved, a top radio talk show host and movie critic, destroys Hollywood's argument that "if we make clean movies, nobody wants to come see them."

The opposite is true. Forrest Gump, a fairly clean movie, grossed a gazillion dollars. Frozen? Even more. If you build it, they will come. Look at the Pixar films, which are a blessing to parents. I can tell you as a parent that if I get wind of an age-appropriate movie in which nobody strips and nobody dies, I cannot wait to rush my kids to the theater to see it. I will wait in the lobby with my eight-year-old until the previews have finished, because for every one movie that's somewhat decent, you've got nine or ten more that are violent or otherwise inappropriate. What's a father to do?

Setting limits, however, isn't something that starts when your kids become old enough to clamor for PG-13 films (or sneak off to see them without your knowledge). It starts from the earliest ages. Your job is to deal with this moving target of where exactly the limits should be set, while finding the sweet spot between compulsively overcontrolling your children and being overly lax.

There's a little Disneyland dad in all of us, the aspect of our nature that wants to let our kids have ice cream for breakfast and stay up all night playing video games, because then, we believe, they will love us.

It's not exactly love. It isn't respect, either. The biggest issue in our home, from the infancy of our children through the present day, has to do with limits on screen time. What are they watching, and how long are they watching it for? I'll share with you some of the things that have worked for us.

The default mode for parenting is to stick your kid in front of a television screen or computer screen and just leave them there, for as many hours as it takes. This is low-engagement, low-reward parenting at its worst. The best term for screens, whether they are TV, desktop, laptop, tablet, smartphone, or anything in between, is the one-eyed babysitter. Here's the problem. Research indicates that babies' brains aren't formed enough even until they're two years old to absorb the stimulation of video without some negative effect on their development. Is this what you want for your kid?

I know that you and your partner are both exhausted from work, sleeplessness, parenting, and the rest. But at the same time, plopping goggle-eyed Junior in front of the widescreen is the worst thing you can do for him. I hate to say this, but now that you went to all the trouble of having a kid (I know--for you it wasn't that much trouble at all), you have to play with him or her.

In his book Babyhood, Paul Reiser writes that his wife left him alone with their two-year-old son for an hour and said, "Just play with him." Reiser says that they did puzzles, played with blocks, read a book, drew, and did a couple of other activities. When Reiser looked to see if the hour had gone by, he realized that only five minutes had passed.

I know you're a hard-charging, type A, make-up-for-lost-time alcoholic or addict. I know, I truly know that by playing with your kid, you're missing out on the opportunity to respond to thirty more emails and texts or watch the latest episode of Homeland. "Look, Daddy has a screen, and baby has a screen!" No. That's just not going to work. Not for the kind of kid you want to raise.

So the first limit you have to set is on yourself, to not give your child the option to sit passively and be overstimulated by all those colors, lights, and sounds. Even Club Penguin is like Vegas for six-year-olds. There have to be some restrictions on time. Otherwise, your kid will happily sit there for hours, motionless, allowing you to tear through those life-changing emails and texts or catch up on Facebook. (Hey, Sober Dad's on Facebook--come hang out with me!) But those lost moments will never come back. Spend them with your child. They'll never be this young again.

Along these lines, I want to pass along a suggestion from the master motivator Tony Robbins, who points out that life is a series of great moments, and it's our job as parents to create great moments for our young children. He suggests that you should open up a file on your laptop called Magic Moments.

Then, whenever your child does or says anything sweet or funny, or if you go on a day trip somewhere, or spend time with another relative, whatever it is, write it down immediately in that file. Otherwise, as he says, the event goes right down the memory hole, and you end up like the rest of the parents who say to themselves, "The first five years" (or "the first fifteen years") "were an absolute blur."

I heard Robbins present that idea about the Magic Moments file eleven years ago, and as a result, we have a seventeen-page, single-spaced, growing list of many of the most delectable moments of our four kids' childhoods. Occasionally I back the file up to Google Drive, or email it around to family members. Sometimes the kids will all crowd around on the couch and we will just read through the list and remember stuff and laugh together. They feel enormous joy, I believe, over the fact that someone cared enough about them to write all this stuff down. It's something special in all of our lives.

So run, don't walk, to your laptop, start that Magic Moments file, put down all the Greatest Hits that you can recall, and then keep adding to it as time goes on. One day, you and your children will thank you.

About the author:
Michael Graubart is a New York Times best-selling author who penned Hazelden Publishing's Sober Dad: The Manual for Perfectly Imperfect Parenting and Step Up: Unpacking Steps One, Two, and Three with Someone Who's Been There. He writes under a pseudonym to maintain his anonymity and speak frankly about his experiences in Twelve Step recovery.

Quote: Spend them with your child. They'll never be this young again.