What makes the latest edition of Lifelines® an effective, complete approach to suicide prevention? Watch this video to learn more.

According to the American Association of Suicidology, suicide ranked as the third leading cause of death for young people (ages 15-19 and 15-24.) While suicides accounted for 1.4% of all deaths in the U.S. annually, they comprised 12.2% of all deaths among 15-24-year-olds.

In order to address this important issue, we have released a revised and updated version of our top suicide education program, Lifelines®: A Comprehensive Suicide Awareness and Responsiveness Program for Teens. This is a whole-school program made up of three unique components: Lifelines: Prevention,
Lifelines: Intervention, and Lifelines: Postvention.

This trilogy of programs is the only existing model of its kind available for teens, and it has been recently updated to be an even stronger asset to your community. The following updates are new to this edition:

The complete Lifelines Trilogy is based on over 20 years of suicide-in-youth research that indicates an informed community can help to prevent vulnerable teens from ending their lives.

This first part of the Lifelines Trilogy educates middle and high school faculty, parents, and students on the facts about suicide and their roles in suicide prevention. It gives students the opportunity to learn what to do when faced with a suicidal peer through role-playing, and shows them the importance of getting help for themselves if needed. Nine included video segments depict real-world situations among peers and help bring abstract concepts into focus. Among these are interviews with recent high school graduates in a variety of educational and career paths to help students visualize what life after high school can look like. Finally, in two additional video segments for adults, Lifelines author Maureen Underwood provides coaching on vital skills in suicide prevention. 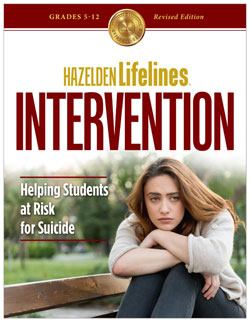 The second installment in the Lifelines Trilogy provides information on how to be prepared to address and respond to threats or signs of suicide and intervene—before it's too late.

Lifelines Intervention provides clear guidance on how best to involve parents and guardians as partners and builds on the foundation of the 'competent and compassionate school community.' Furthermore, this program introduces the "Tell Me More" format of intervening on a student at risk for suicide, and provides information on how to prepare to interview an at-risk student, gather collateral information about the student's risk for suicide, and address specific topics. This revised version includes two new handouts explaining suicide warning signs and how to do a warm handoff when you suspect a student may need more care, as well as updated language to reflect today's best practices and youth culture.

Lifelines Postvention: Responding to Suicide and Other Traumatic Death 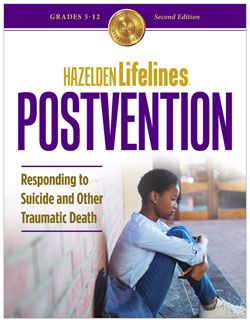 This comprehensive third installment of the Lifelines Trilogy educates everyone in middle and high school community on how to successfully address and respond to not only suicide, but any type of traumatic death that profoundly affects the school population.

With in-depth references and detailed plans, this resource outlines a response strategy that reflects the challenges schools face in dealing with a death within the school community. This newly revised edition includes updated language and new topics to reflect today's society, and now also covers grades 5-6 and 11-12.

Lifelines Postvention: Responding to Suicide and Other Traumatic Death
Teacher's Manual and a USB Flash Drive

Although the research and outcomes are based on school-wide implementation, any part of the Lifelines Trilogy can be a successful component to community-based programs, such as Girl Scouts, Boy Scouts, and Boys and Girls Clubs of America.