After Your Child Dies 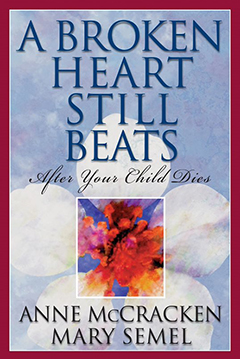 There are few, if any, events in life as traumatic, heart-wrenching, and crushing as the death of a child. While nothing can mute the pain of such a life-shattering loss, others who know this experience can help those suffering articulate the chaos of their feelings and see that they can, eventually, feel whole again.

Organized by a journalist and a psychotherapist, each of whom has lost a child, A Broken Heart Still Beats is a remarkable compilation of poetry, fiction, and essays about the pain, stages of grief, and the coping and healing process that follows the death of one's child. The chapters are organized thematically and chronologically, from "Thunderstruck," the point at which parents first learn they have lost a child, to "The Legacy of Loss," wherein the authors and the anthology selections speak to the "steely hard and cold" life lessons this type of bereavement brings.

This compilation of poems and excerpts draws from short stories, novels, biographies, and autobiographies that focus on the death of a child as relayed through classic and contemporary world literature. It is made up of works by some of the best writers and thinkers present and past, many of them bereaved parents as well, ranging from Mark Twain, Isabel Allende, William Shakespeare, John Edgar Wideman, Fyodor Dostoevsky, Anne Morrow Lindbergh, Anne Tyler, and Sophocles to Eric Clapton and Winston Churchill. Biographical introductions personalize the excerpts, often offering new insights into well-known writers like William Faulkner and Rudyard Kipling. This book's anthologized selections make it truly exceptional.

A Broken Heart Still Beats—expresses the universal themes of grief--and the common points of these experiences and feelings—in language and imagery that goes straight to the heart. The fact that each of the authors has lost a child brings a powerful authenticity to the book. Bereaved parents and family members as well as mental health professionals, bereavement counselors, and those interested in grief literature will all find this book extremely valuable.

"As one who has experienced the tragic, untimely death of a child, I have found this anthology of similar experiences an excellent source of comfort and healing."
--George McGovern, former U.S. Senator and Presidential candidate.

"By putting words to what is surely the most unspeakable of life's losses, this eloquent and painfully honest book may help make the darkness a little less dark, the loneliness a little less lonely."
--Judith Viorst, author of Necessary Losses

Born and raised in new York, Mary Semel graduated from Goucher College in Baltimore. She is a psychotherapist who, after working for many years at Sheppard Pratt Hospital, now has a private practice. Her sixteen-year-old son, Alexander, was killed in a car accident in 1991.

Anne McCracken is a former newspaper reporter and feature writer. She lives in Baltimore, Maryland, with her husband, Tom, and her daughter, Hollis. She lost her five-year-old son, Jake, in 1989.

The authors have appeared on "The Today Show" and National Public Radio's "Morning Edition."

While nothing can mute the pain of losing a child, others who know this experience can help those suffering articulate the chaos of their feelings and see that they can, eventually, feel whole again.