"The notion that your craving was a phase, a temporary problem, and now you can finally rest is overconfidence." 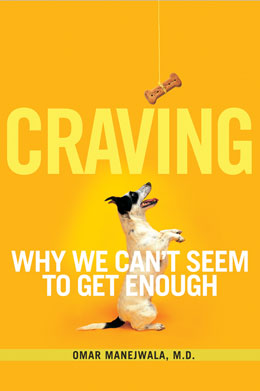 Passages Through Recovery: An Action Plan
for Preventing Relapse

Spent: Break the Buying Obsession
and Discover Your True Worth

Rein-in Your Brain: From Impulsivity
to Thoughtful Living in Recovery

The Myth of Immunity: Risks that Accompany Success


In Craving, author and physician Omar Manejwala, translates the neurobiology of this human phenomenon into real and accessible terms, explaining why we just can't seem to get enough. In this excerpt, Dr. Manejwala describes how people in early recovery from any kinds of addictions often believe they are safe from relapse because they have discovered precisely what they need to stop acting out on their craving. The overconfident brain tricks us into believing we're immune—that we'll be okay, this time will be different. It's that very belief that renders us most vulnerable. Manejwala calls this "naïve perception of immunity."

The idea that we're naïve about this important aspect of ourselves—that we really may not know enough about ourselves and our cravings to stop acting out on them—may come with some discomfort, but, as Dr. Manejwala points out, it's essential. As we learn how to broaden our perspective enough to see that we might need help from others, then we can begin to develop some resiliency against being tricked yet again by our cravings.

The Risks That Accompany Success

You're actually most at risk of the naïve perception of immunity when things are going well. For example, consider the alcoholic who has been sober for three months and is about to relapse by taking her first drink in ninety days. At the moment, things are going great. She has never felt better. She's so glad she's finally licked the alcohol problem. She's been rehired at her job, and her marriage and family life have improved as well. She is even getting back on the beam financially. If you were to do a physical exam on her, you'd find she is in great shape. Her blood pressure is finally normal, and if you took a breathalyzer reading at that moment, it would read 0.000, just as it has every day for the last ninety days. She is sober, and by all outward appearances, she is doing great.

However, if you could read her mind, you would find that it tells a different story. In her mind are a variety of thoughts placing her at extreme risk of taking that first drink (and the ones that inevitably follow) and ruining her sobriety. For some people the thought might be "I'm finally okay; I've proven I don't need alcohol." For others it could be "I don't care—I deserve a drink." Other lies that your brain can generate may involve a desire to celebrate, commiserate, take the edge off, "prove" that you don't really have a drinking problem, or confirm that you had been overreacting to the problem. These types of lies can come in every form you could imagine, and then some. Often, they occur after a period of success or when things are calm. On the other hand, they may occur in response to stress. These thoughts can even be so subtle that you don't notice them. The one thing they have in common is that they serve to convince you to take the first drink (or that first cigarette, or that first piece of cheesecake, or whatever your craving is). And that's the naïve perception of immunity.

So it seems that you are most likely to believe you are immune when things are going well. Does that mean you should be constantly afraid of achievement and never be able to enjoy your successes? Does it mean you can never regain confidence? No, the truth is just the opposite. The secret lies in the difference between confidence and overconfidence.

So what exactly does healthy confidence look like? What are the characteristics of someone who is experiencing true confidence? First of all, it's important to have some real success in dealing with the craved behavior. A few days or weeks of improvement in a behavior usually aren't enough. If it's been two weeks since you last acted out on your craving, there is much to celebrate, and you should be proud and keep up the great work. But that's usually far too short to result in real, healthy confidence.

There is no definitive cutoff for how long a new behavior pattern should last before it leads to healthy confidence, but in my experience it's rarely weeks or a few months. Usually (but not always), it takes many months or years. The key is to develop enough abstinence or success in eliminating the craved behavior to be confident, but to always be vigilant against overconfidence. Another aspect of healthy confidence is that healthy behaviors and habits no longer feel mostly like chores; rather, they will usually become joyful and something you look forward to. You may find yourself as attracted to the actions that produce success as the success itself. You can begin to trust that your confidence is not overconfidence when the actions you took to develop your behavior change and reduce your cravings—the actions that produced these joyous results—are themselves fairly consistently joyful and pleasant. I call it being in the confidence zone.

In Twelve Step meetings, newcomers often ask, "How long do I need to go to these meetings?" One answer that old-timers will often give them is "Go until you want to go, and then go some more." The essence of that recommendation is the change in attitude we have been discussing. That's the secret. The real solution to the sense that you are immune, the perception that often comes on strongly when you are doing well, is simply this: the actions you take to produce recovery will themselves be as desirable to you as the thing you originally craved. I'm aware that this may sound completely crazy or impossible to you right now. The experience of thousands of recovering people confirms that finding release from cravings is a fundamental change in what you want, which is produced by what you do—not the other way around. And that's what is so amazing about gaining freedom from cravings: the process sustains and fuels itself. One simple example of this is when people improve their fitness and health through exercise. At first it's a chore, but gradually it becomes an activity they do because they enjoy it, not because they have to. The action is more of a driver than the result, yet the result continues. Actions change desires, healing produces more healing, and connectedness and spirituality are both the drivers and the results of recovery.

About the Author:
Omar Manejwala, M.D., is a psychiatrist and an internationally recognized expert on addiction and compulsive behavior. He is the former medical director of Hazelden, a treatment center in Center City, Minnesota, and currently the chief medical officer of Catasys, a health management services company specializing in substance dependence. He has appeared on numerous national media programs including 20/20, CBS Evening News, and The Early Show.

© 2013 by Omar Manejwala
All rights reserved