"Yet when I climbed onto the bike, all the worries—about money, success, love—would roll off my shoulders." 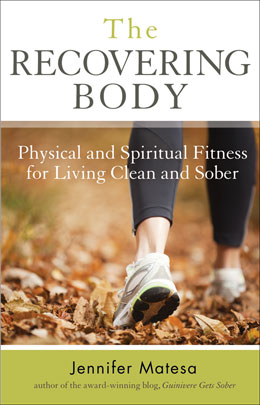 Sex in Recovery: A Meeting
Between the Covers

Recovery and Your Physical Well-Being


In her book The Recovering Body: Physical and Spiritual Fitness for Living Clean and Sober, health writer and recovery blogger Jennifer Matesa offers a guide to achieving physical recovery as part of our path to lifelong sobriety. For those of us who punished our bodies during active addiction, this book discusses how we can go begin repairing the damage—an amends to ourselves—as we set about rebuilding our lives in recovery.

In this excerpt, Matesa shares her personal story of how physical activity helped her stop craving alcohol and find a sense of home for the first time. We learn how exercise can open up our senses, increase our productivity, and naturally decrease the desire to use.

When I was twenty-four, after working a couple years as a newspaper reporter I went back to school for a master's degree in writing. I'd spent several thousand hours in newsrooms reading Associated Press wire copy written at an eighth-grade reading level, so it took me a while to get used to reading French linguistics theorists. But I made a running start on writing my first book manuscript and learned how to maintain authority in a classroom with students who were only five or six years younger than I was. And I ended the academic year totally stressed out. I'd broken off an eighteen-month relationship with a heavy-drinking and physically mean guy, had a fling with another heavy drinker, and fell for yet a third one who was sleeping with someone else.

I counted myself lucky when, before summer break arrived, I snagged an off-the-books job waiting tables. One weekend, I came back after my shift to find the apartment I shared with a friend ransacked, with several of her valuables missing.

I lost my ability to cope. Intellectually I was ahead of my years, but emotionally I was twenty-four going on about fourteen. When my roommate moved out and left me hanging with the lease, I did what I had to do—I told my landlord I wanted to leave, negotiated for my security deposit, put it down on a new apartment, and moved. But the way I managed my feelings was to reenact what I'd learned in my original family. I refused to admit I had any feelings about any of this, and then I drank and binged on cookies and other sweet stuff.

Rationalizing that I was "staying cool" that summer of 1989, I'd mix myself frozen drinks with pricey, gut-wrenching ingredients—each one loaded with sugar. I'd scarf down entire bags of cookies. I ate alone, and because that felt so lonely and loser-ish, I drank alone. I gained twenty-five or thirty pounds within a couple of months, so much weight so fast that my hips and breasts still bear the web of silver stretch marks from those binges.

Toward the end of the academic year, I sat in one of my seminars and doodled a list of things I wanted to do that summer. I found this list the other day in a notebook at the bottom of a box, like a time capsule from another life. The list's top items:

As you can see, except for the bike, I'd packed up and moved out of my body. And when it came to the bike, here was my strategy: I would buy a bike, then go home, get wasted, and eat a load of chocolate. I wanted a bike, but in those days I didn't believe I could have what I wanted, so I drank and used.

The desire to ride a bike is not a theory—it's a sensation you feel inside your body: you want to put your body on the machine and move. Preferably fast. But feeling the emotions that my body can feel, even the "good" feelings, always scares the shit out of me.

As it happened, I did get drunk and eat chocolate (the little black dress, one of many, would come a bit later). And I managed to buy a bike.

I scoured the want ads and found a barely used European bike, a French bike. I loved it as soon as I saw it without understanding why, and I sprang for it on the spot. The first time I managed, gasping and sweating, to pedal it up one of Pittsburgh's many hills, I experienced one of the powers greater than myself that I have respected ever since: gravitation. The earth's gravity dictates that what goes up has to come down, and this aluminum-alloy bike could fly. As soon as I shelled out for a speedometer, I found out that if I worked with gravity I could make the bike careen thirty-five miles an hour down one of the longer grades in my part of the city—ten miles an hour above the speed limit on that stretch, a pace that when I manage it today still makes the hair stand up on the nape of my neck and my voice scream with the relief of physical release.

I rode that bike every day during the summer of 1989. I remember telling a friend it was "my psychic salvation."

Since I couldn't booze and bike at the same time, I chose to drink less. And the more I rode, the less I seemed to want cookies. I wasn't watching my weight, yet by the time September rolled around, I had lost every ounce I'd put on in the spring and I was fitting into my clothes comfortably.

But what I loved most were the feelings that cycling gave my body. That summer I was working two jobs and writing on the side. I'd spend hours serving heavy dishes or sitting immobile in front of the computer, and afterward I felt iron fingers digging into my shoulders and lower back. Yet when I climbed onto the bike, all the worries—about money, success, love—would roll off my shoulders. I gained strength and endurance. Soon I was timing myself on my eight-mile route, yelling in triumph when I'd break my own record. But the encouragement of the numbers aside, what satisfied me most was an experience that can't be measured: the opening of my senses. I came to know the neighborhoods and the passing of time on a daily basis by the smells of the outside world: honeysuckle at midnight in May, lilac at sunset in June, black locust on a July early morning. And through the scents of each season: cut grass in summer, rotting leaves in autumn, the smell of first snow. Soon my body began to crave not alcohol or sugar (which are pretty much the same thing), but the touch of the earth's beauty on my skin, inside my lungs, through my eyes.

I learned that I meet the world through my physical body. That's what I experienced back then, without entirely understanding what I was experiencing.

I don't think it was a coincidence that so many other productive things happened in my life during that time. That summer I wrote my first magazine piece, which was published that fall. I drafted the first section of my master's manuscript and gave a public reading to a packed house. I made new friends and moved into a bigger apartment. I had finally, for the first time in my life, really come home.

About the Author:
Jennifer Matesa has written about health and life transformation for more than twenty years, including the books Navel-Gazing: The Days and Nights of a Mother in the Making, chosen by Lamaze International as a Top-Ten pregnancy and childbirth resource, and Knowing Stephanie, a biography of a young breast cancer patient. In 2010 she established the popular blog Guinevere Gets Sober (www.guineveregetssober.com), for which she has interviewed many scientists, practitioners, authors, and ordinary folks with fascinating stories about recovering from addiction.

© 2014 by Jennifer Matesa.
All rights reserved