"We had to accept that when it comes to alcohol, we are different from most people." 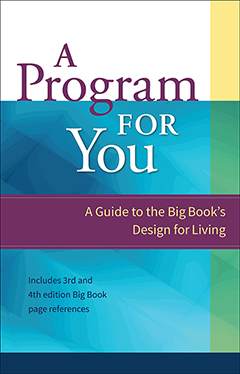 A Gentle Path through the Twelve Steps:
The Classic Guide for All People in the Process of Recovery

Living with Your Higher Power:
A Workbook for Steps 1-3

Living with Yourself:
A Workbook for Steps 4-7

We're Not Normal: Allergy, Addiction, and the Myth of Willpower


Often in recovery, we may wonder, Why me? We don't understand why we cannot consume a substance without going overboard or triggering our addictive process. We've seen others drink and use without an addiction following them home. What's so different about us?

A Program for You: A Guide to the Big Book's Design for Living is an intensive study of the basic text of Twelve Step recovery—the Big Book of Alcoholics Anonymous. This popular classic leads us to a deeper understanding not only of the Big Book but of recovery in general and, especially, of ourselves.

This excerpt offers insight about the Big Book's definition of "allergy" when it comes to alcohol or other addictive substances. Most of us addicts tend to be black-and-white thinkers, which doesn't always serve us well. But in this case, it seems to work in our favor. It can be comforting to be given a physical reason not to drink or do drugs. It removes the guesswork and takes the option off the table. If we are allergic to alcohol and other addictive substances, we should not consume them. Doing so will not go well for us.

Follow along as the anonymous authors of A Program for You explore how we alcoholics and addicts are different from people who are "normal social drinkers," and bust the unhelpful myth that "willpower" can save us.

Alcoholism as an Allergy
Before the two of us who wrote this book came to AA or read the Big Book, we thought we knew what the word allergy meant. We knew that if you were allergic to something, and you ate or drank or breathed some of it, you'd have a physical reaction. If you're allergic to strawberries and you eat some strawberry cake, you'll break out in a rash. If you're allergic to ragweed and you breathe in some ragweed pollen, your eyes will itch and you'll start to sneeze.

When the two of us first came to AA, we were told, "Fellows, you're allergic to alcohol and you'll never be able to safely drink it again." Well, the first thing we thought was, How can we be allergic to alcohol? We've been drinking a quart a day. We don't get rashes from it, and we don't start sneezing because of it. How can you drink that much of something you're allergic to? We thought that if you're allergic to something, it meant you had to have a visible physical reaction to it, like sneezing or hives. But if you look in a dictionary, you'll see that one of the definitions of an allergy is an abnormal reaction to a food, beverage, or other substance—not necessarily sneezing or itching or vomiting, but any abnormal reaction.

The only thing we knew about alcohol was the way we drank it and the way those who drank with us drank it.

Eventually, we realized that to find out what was normal, we'd have to talk to people who weren't affected by alcohol like we were—the so-called social drinkers. We asked some of these people, "How do you feel whenever you take a drink?" And they'd answer something like this: "Well, I get home from work feeling tired, tense, and wrought up. I have a drink or two before dinner and, in a little while, I get a comfortable, relaxing feeling. Then I have dinner, and usually I don't drink any more that night."

At first we were a little shocked by this because that's not the way we felt at all when we drank alcohol. When either of us would take a drink, we'd begin to respond instantly. As the alcohol would pass over our lips, they'd begin to tingle. It would cross our teeth, and they'd kind of chatter up and down. When it hit our tongues, we could feel them expand and swell. Then it would reach our cheeks, and they'd flutter in and out a little. We could feel it passing up through our sinus cavities and into our foreheads, and we'd get a feeling in our foreheads that was absolutely, indescribably wonderful. And we wouldn't even have swallowed it yet—the first sip would still be in our mouths!

Once we did swallow, great things would begin to happen. Our chests would seem to grow and expand. Then the alcohol would hit our stomachs and explode like a bomb. We'd immediately feel it racing through our arms. When it reached our hands and fingers, they'd begin to tingle and vibrate. The alcohol would race through our legs, and we'd feel like we were getting taller. Then it would hit our feet and toes, and we'd experience an intense, exciting get-up-and-go-somewhere-and-do-something feeling.

Now that's awfully different from the warm, relaxing feeling most people get when they drink.

Social Drinking and the Myth of Willpower
When we talked to some of the normal, average social drinkers, we also asked them how they felt when they had several drinks in a row. They told us that they would get a slightly tipsy, out-of-control, nauseous feeling. "We don't like that nauseous feeling," they said to us, "so two or three drinks are all we have, and all we want."

After we'd talked to enough people and heard them say the same thing, we realized that this is the normal reaction to alcohol. It is a sedative drug, so it's supposed to make you slightly tipsy and a little out of control. Since alcohol is a destroyer of human tissue, the body is supposed to react to too much of it with nausea. When you put too much of it into the body, the body will vomit it back up to get rid of it.

This answered a huge question for us. We had always thought that social drinkers used willpower to stop after only one or two drinks. In fact, that's one of the things they'd often say to us: "All you have to do is use willpower, like I do." But they don't have to use willpower at all because one to three drinks are all they want or need. They get all they want to drink every time they drink, so it's easy for them to stop.

For years we'd look at those normal social drinkers and wonder about them. They would have two drinks, and when somebody offered them a third, they'd say, "Oh, no, I feel this one already," or "No, I'm getting sleepy," or "No, it'll make me sick." We never understood how people could say these sorts of things because that's not how alcohol made us feel.

When we would drink alcohol, we'd never feel slightly tipsy or out of control or nauseous. We would feel in control. Instead of reacting with nausea, our bodies would say, "Drink some more alcohol." Our bodies would produce an acute physical craving—one so strong that we couldn't imagine how we'd be able to stop drinking. We would plan on having only two drinks, but once either of us had put those two into his system, the physical craving would develop. Then the body would take over, and the mind would no longer be in control. We'd have a third drink, and a fourth, and we'd keep drinking, and soon we'd be in all kinds of trouble.

That is an abnormal reaction to alcohol.

Please understand that "abnormal" doesn't mean "bad" or "weak" or "wrong"—it's just different from what most people experience. The only difference between normal and abnormal is that normal is what most people do. It so happens that about one person in ten reacts to taking a drink in much the same way we do. Those people have an allergic reaction to alcohol, just like we do. If you react to alcohol in pretty much the same way, you've got the allergy too.

After talking to people, both of us realized that our reaction to alcohol was abnormal, and we began to understand why neither of us could drink without getting drunk. We also began to see how our drinking must have looked to normal people. We had to accept that when it comes to alcohol, we are different from most people. When normal people feel the effect of alcohol, they're ready and able to stop drinking. But when alcoholics feel the effect of alcohol, they want to keep on drinking.

© 1991 by Hazelden Foundation
All rights reserved