"My feelings changed a lot as I went through the Steps, and so might yours." 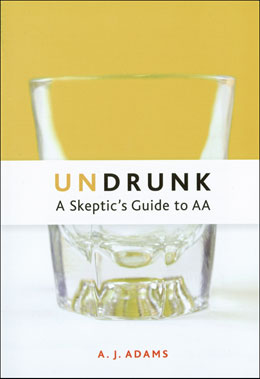 Cornerstones: Daily Meditations for the
Journey into Manhood and Recovery

A Day at a Time: Daily Meditations
for Recovering People

The Twelve Steps of Alcoholics Anonymous

Easy to Read, Hard to Do: Steps One and Two for Skeptics


It can be daunting to step into the world of Twelve Step recovery where everyone else seems to know the program, but we don't. We're newly sober, or we're trying to be, and we keep hearing that we need to get ourselves to Alcoholics Anonymous or another Twelve Step meeting. Or maybe we've tried working the Steps before but "just didn't get" them. What exactly are they and why are they so important to staying sober? How could this little blue book that people carry around help us? How can a program so old be of any use in today's world?

In his book Undrunk: A Skeptic's Guide to AA, A. J. Adams answers these important questions and more. He describes how he came to join AA—as well as how he overcame his preconceptions of the program. In the following excerpt, Adams introduces the Twelve Steps to people in early recovery and shares how he learned to navigate Step One, We admitted we were powerless over alcohol—that our lives had become unmanageable, and Step Two, Came to believe that a Power greater than ourselves could restore us to sanity.

THE TWELVE STEPS AND TWELVE TRADITIONS
Despite a name that sounds like a 1950s British mystery novel, the Twelve Steps and Twelve Traditions are the mother lode of recovery from booze. If 2 million people were rescued from any other fatal illness, by any remedy at all, you wouldn't be able to keep it on the shelves. Although I didn't see things with this kind of clarity as my drinking spun out of control, my choices were clear: have another drink and think about AA, or give it a whirl. I chose to have another drink and give it a whirl.

The Twelve Steps
There are two things about the Twelve Steps that every newcomer must understand before undertaking the miracle of recovery. I didn't know either of them until recently, so maybe you don't really have to know them early on, but it might help.

First, the Steps are a suggested program, not a program of suggestions. The distinction is important. For example, I like to assemble things I get from Target by looking at the picture of the finished product on the box. To me, any leftover parts are just spares. The message here is do not cherry-pick the Steps for the easy ones or skip the ones that make you tense up. Do them in order, do them honestly, and do them all.

Second, suggested program means just that—it is a suggestion. If AA is a quilt, the way each of us ultimately works the program is our square. Drunks are not born followers, so there are as many roads to recovery as there are AAs. You can do the Steps quickly or slowly, and many people do them over again every so often. I recommend getting the first three under your belt without delay, but you make the call. As long as real sobriety is where you want to go and you resist shortcuts, the Steps will get you there.

I started the Steps in rehab. My counselor set getting through Steps 1, 2, and 3 in four weeks as "recovery milestones" in my treatment plan. I viewed my treatment plan as my get-out-of-jail card, so I took every word in it literally. I wasn't willing to risk my release papers twenty-eight days down the road, so I threw myself into the work. My motivation was impure, I admit.

Whatever your incentive is, I recommend putting your shoulder into the Steps.

Step 1
"Okay," I said, pulling out my Big Book, "let's get going on these Steps." I was doing fine until I actually started. Step 1 flummoxed me big time. First of all, I expected that the first Step would be something like "Thou shalt not drink the evil grape ever again." Not only was quitting drinking not in the first Step, it is nowhere to be found in any of the following eleven. My keen intellect—sharpened by heavy doses of Librium in early treatment—told me that a trick was being played here. I read Step 1 carefully:

We admitted we were powerless over alcohol—that our lives had become unmanageable.

Out of thirteen words, I was having trouble with four of them. First of all, why did I have to "admit" anything? Why couldn't I simply think or suspect? And "powerless"—wasn't that a little strong? After all, I was in rehab. Wasn't that a powerful thing to be doing? Also, saying I had a problem with "alcohol" in general irked me. I had drunk all kinds of booze, including beer, wine, tequila, and Southern Comfort, without more than the occasional regret or hangover. My problem was with vodka. Finally, I really resented being asked to say my life had become "unmanageable." I had never missed a mortgage payment. Some of the guys at rehab joked that in their version of Step 1, it was "... that our wives had become unmanageable." I thought that was funny and more realistic than saying my entire life had gone off the rails.

I brought my misgivings about Step 1 to group therapy, certain that major editorial changes in the text would result from my thoughtful critique. Bill Wilson had obviously fallen prey to purple prose when something calmer would appeal more to sensitive people like us. I explained my suggested improvements of the text carefully to my group. I could almost handle the counselor's smirk, but the guffaws of my fellow drunks were heartbreaking. "You are so in denial! You really don't get it, do you, A. J.?"

The group's rejection of my absurd self-justification was a blinding flash of the obvious for me. I was in denial. Big chunks of my life were starting to crumble: family, work, health, self-respect. I was scared. Innumerable attempts to drink like other people had failed, and I was beaten. I was in rehab and I was doing the Steps because I had to in order to survive. I was not going to die tomorrow, but I was doomed unless I jerked myself into another reality. I was an alcoholic and I belonged in AA.

Step 2
Came to believe that a Power greater than ourselves could restore us to sanity.

I went to Sunday school and church growing up, and it was a positive experience, so I didn't react the way some other patients in rehab did to the Higher Power thing. I got the feeling that some of my fellow sufferers had been let down by the Big Guy over time, and some carried quite a grudge. Throughout my drinking career, I'd prayed for everything from a burst of sobriety at the DUI stop to strong onions on my hoagie. It was the idea that I was somehow insane that alerted my psychic defenses. I knew that schizophrenia and bipolar disorder were forms of insanity, and I knew I didn't have either of those. So how come AA was calling me crazy?

After getting my wagon fixed by my group on Step 1, I was a little less strident when I inquired about the term "sanity," and the explanation made sense. Insanity, I was told, is doing the same thing over and over and expecting a different result. In my case, this meant drinking day after day with the expectation that I could control it, but always ending up blotto. Add to this the fact that drinking this way would eventually kill me, and it does suggest a kind of nuttiness.

God again. If you can get by "insanity" but have trouble swallowing the Higher Power concept, do not despair. Lots of newcomers feel this way, and there is even a chapter in the Big Book aimed at agnostics. After all, if your average drunk was much of a believer to begin with, there might not be so many of us. One gimmick to get past God-skepticism is to use the AA group itself as a sort of Higher Power for starters.

My feelings changed a lot as I went through the Steps, and so might yours. Just accepting that I was suffering from an affliction that I couldn't address alone was enough at first. Later on I got more serious about enlisting long-term help. The point is just that we have a problem we can't fix by ourselves and there is something out there that is bigger than we are that can help us. No one has to get anointed in AA.

About the Author:
A. J. Adams, a recovering alcoholic, consults, writes, and teaches. He lives with his wife in the Southwest. A. J. Adams is a pen name.