"How can we stay healthy if we can't say the truth about sex, at least to ourselves?" 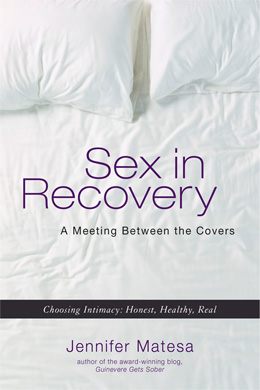 The Recovering Body: Physical and Spiritual
Fitness for Living Clean and Sober

A Place Called Self: Women, Sobriety,
and Radical Transformation

Sex and Recovery: Telling the Truth Together


The caution against starting any new romantic relationships during the first year of recovery is based on sound wisdom. Recovery starts when we can clearly focus on ourselves, which means not getting distracted or confused by the presence of someone new and exciting in our lives. But what about those of us who are navigating existing relationships along with newfound sobriety—or those ready to try dating and sex without the interference of alcohol or drugs?

In her book Sex in Recovery: A Meeting Between the Covers, Jennifer Matesa argues that the language and practices of recovery are as appropriate to the bedroom as they are to the church basement meeting. Just like every other aspect of our recovering life, we're invited to approach sex and intimacy with courageous self-examination and humble honesty. Healing the harms of our past extends to the most private parts of our lives. Doing this work will help our relationships in every arena.

Readers will come away with the knowledge and insight that our courage can extend to our approach to sex and intimacy in recovery. One note of caution: It is important to be sure we are ready to take on this work, especially if our use of substances was connected to an effort to deal with shame and trauma around sex. Consider reaching out to a therapist, sponsor, or trusted friend if you need help processing your feelings and experiences with sex. That is courageous, too.

Trying Rigorous Honesty in Bed
Much of American culture still fosters an outdated fallacy from its Puritan past: we'll grow up virgins, find our one true love, and marry that person—and we'll never be attracted to anyone else ever again. And we all know this story is a lie, but many of us try to fit ourselves into that box anyway. Somehow—possibly with the help of drugs and drinking—we try to shape our lives according to this fallacy, even when we know it's contrary to our experience. And then we get sober by practicing rigorous honesty. How can we stay healthy if we can't say the truth about sex, at least to ourselves?

I talked with a number of people in recovery who were practicing telling the truth about sex, even while in bed. There was Maggie, a sixty-two-year-old woman with twenty-two years of recovery. Her husband is also roughly twenty years sober, and a few years after they were married, before he got sober, he left her and began dating another woman. Meanwhile, Maggie had been abusing prescription painkillers. "When I was using, all bets were off. I was much more hurtful to him, because I was hurt by him. We kept hurting each other, back and forth." But then they both made it into recovery, and after a couple of years they moved back in together. She had to think carefully about whether she could let go of her feelings of abandonment and betrayal.

"In the beginning, I was cautious. I was afraid to open up emotionally and be vulnerable again. When he wanted to get back together, I just thought, 'No way.' I didn't ever want to be hurt like that again. But as time went on, I realized he was the real deal. His character really did change when he went into recovery. He was much more present. He wasn't angry all the time. He wasn't as defensive or volatile. He was able to be much more honest with his feelings."

"Since we got into recovery, the level of loving each other is the deepest change. That has been the greatest gift—love and respect. That goes for when we're in bed too. I think I have more fun in life now, in every way. With sex, it's just all part of the rest of life. I still most of the time feel like I don't have any drive to have sex. But I kind of hop into it, and once I'm there, I'm okay. I'll say to him, in bed, 'Look, I don't feel like having sex, but let's just play around and see—I'll get there.' And he understands that not as a rejection of him but as a vulnerability that I'm offering to him so he can love me through that process, and we get to the point where it's fun."

Maggie worked hard to get to the point where she could be honest between the covers. "First I have to be honest with myself, and then communicate that to him. Making clear that it's not that I don't want to have sex with him in particular, but it's just my emotional state that I have to work on at that moment. Before I got sober, it wasn't even like I was too afraid to tell him I didn't want to have sex—it was just that I didn't even know what was going on with me. I didn't understand myself. I was hurting myself by not speaking the truth. After getting sober and getting therapy, I was more of a whole person, accepting my flaws more, and knowing I could communicate those flaws, and tell him, 'This really has nothing to do with you, but I want to tell you how I'm feeling.' It seems like a simple thing to say that kind of a sentence, but to me it's huge. I worked many, many years to get to that point."

Experiencing Sacredness
One of the most unsettling and yet oddly comforting pieces of advice that I've ever heard about practicing honesty about sex in recovery came from Gabriel, who tells his story of getting sober in New York City in his thirties. For many years Gabriel, a straight guy who identifies as both Jewish and Buddhist, has practiced Ashtanga, a fairly athletic form of yoga. His practice makes him sweaty and hot, but his primary reason for practicing yoga is not the workout; it's to cultivate awareness of his mind and body. Which is to say, it's to cultivate intimacy with himself first.

"Be really honest," Gabriel said. "Do not take advantage of people in conditions of weakness or vulnerability. Understand that you're giving them something and they're giving you something, and you should treat that as a very, very precious gift. That means even if you're having sex but aren't in a relationship.

"Sex is a big thing to give somebody! It's, like, you know, what giving food meant in the desert, in the conditions of the ancient world. It's something that's very precious and that approaches a sacrament, and we often don't treat it like that, and you don't want to be super pompous about it, but it's like—you're giving somebody your body."

Two Queries
Following are two open-ended questions designed to help you discuss this topic with your partner, friends, therapist, or sponsor—and reflect on within yourself.

About the Author:
Jennifer Matesa has written about health for more than twenty years and authors the award-winning blog Guinevere Gets Sober. She is a regular contributor to TheFix.com, and in 2013 she became a fellow of the Substance Abuse and Mental Health Services Administration. She is the author of The Recovering Body.

© 2016 by Jennifer Matesa
All rights reserved